Home » Premier League fans must wear masks, not sing too much and no hugging
Soccer

Premier League fans must wear masks, not sing too much and no hugging 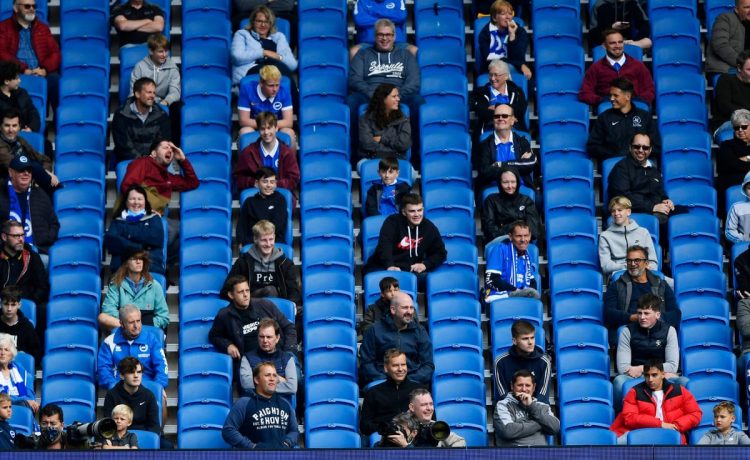 Fans at Premier League matches will have to wear face masks at all times when they return this weekend as part of a plan to get stadiums back to one-third capacity by the end of the season.

The regulations, which also include a mandatory temperature check on arrival, go beyond the government’s guidance. Supporters will also be told not to excessively sing or shout and to moderate their behaviour so they do not high-five or hug.

Agreed at a Premier League shareholders’ meeting on Thursday, the regulations are part of a wider plan to show the government that football can safely handle the return of fans. The hope is some grounds could have up to 20,000 spectators by the end of the season, especially with a vaccine about to be rolled out.

The requirement for fans to wear face masks in their seats will reduce the risk of transmission of Covid-19 from singing and shouting, and make it easier for stadiums to comply with Sports Grounds Safety Authority rules relating to social distancing. With masks, fans can be seated a metre apart, whereas the requirement is two metres for those without.

Under the three-tier system in place across England, outdoor sports venues can have up to 2,000 fans in tier 2 areas and 4,000 in tier 1 but no fans in tier 3. Premier League executives are hoping that the government will allow them to use pilot matches to increase these numbers in the new year. Ten Premier League clubs can currently welcome 2,000 fans under the tiered system.

The Premier League is understood not to be looking to secure vaccines for its players in the immediate future. However it is looking at ways to support the government’s vaccine plan by enabling football facilities to be used for the inoculation of the public.

On Wednesday about 10,000 fans were allowed into six games in the English Football League, albeit with a number of restrictions in place. Supporters were allowed to drink alcohol without ordering a substantial meal – but only when seated in concourses or hospitality areas.

Fans were also advised against using toilet facilities “at peak times” – at half-time and the end of the game – and told to stay in their seats throughout the game “if possible”. However they were allowed to take masks off while seated, which will not be permitted in Premier League grounds.