Homelatest newsPremier League: 10 things to look out for this weekend
latest news

Premier League: 10 things to look out for this weekend 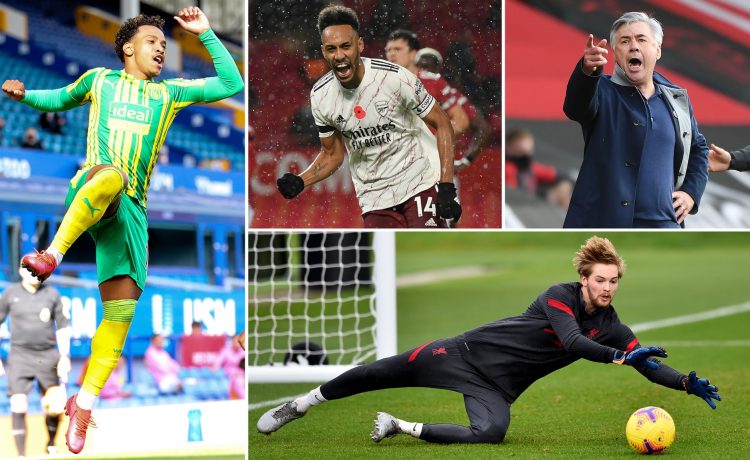 1) Will Aubameyang rise to occasion in derby?

A year ago José Mourinho was widely being cast as a dour, retrograde choice for the Spurs job while Mikel Arteta was to be hailed as the man to drive Arsenal into a bright new future. The temptation might be to archly enquire how that is all going, but the more relevant point is that managers cannot always be pigeonholed. They may have one thing in common at Sunday’s north London derby, though: neither Mourinho nor Arteta is minded to be gung-ho in games of this magnitude, much as Arteta in particular might behave differently if he had a better-balanced squad. This looks likely to be a cautious affair given Spurs’ increasingly convincing designs on the title and Arsenal’s need to arrest a deeply concerning autumn slump. Both sides will be looking for their front men to make the most of chances. Harry Kane invariably does so, but can Pierre-Emerick Aubameyang, badly out of sorts this season, rise to the big occasion once again?

2) Kelleher to face another test against Wolves

Jürgen Klopp celebrated blooming youth in the aftermath of Tuesday’s hard-won Champions League defeat of Ajax. While Neco Williams and Curtis Jones conjured the winning goal between them, Caoimhín Kelleher was first to receive a bear hug from their manager. The goalkeeper’s ability to play with the ball at his feet, born of playing as a midfielder in his schoolboy days back in Ireland, would seem to push him ahead of Adrián, rather less of a ball player, in the reckoning to stand in for Alisson, the latest victim of Liverpool’s plague of muscle injuries. Williams and Jones may play their part, too, as Klopp’s rage at the scheduling continues to be justified by senior players breaking down. Wolves are also having to look to youth, with Raúl Jiménez set to be missing for some time after fracturing his skull at Arsenal on Sunday. Fábio Silva, who came on at the Emirates after that sickening injury, showed fleeting glimpses of what made him worth £35m from Porto. Nuno Espírito Santo is being characteristically cautious with him, but a vacancy has arisen.

3) Time for Brewster to pay back Blades’ investment

Sheffield United pummelled West Brom last weekend but still lost, leaving Chris Wilder to demand “better technique, better composure and better quality” from those on the end of their chances. Something has to change quickly: Oli McBurnie was an almighty handful last season but is yet to get off the mark this time; Oliver Burke has not scored either and, although David McGoldrick has chipped in twice, the veteran is unlikely to drag the Blades out of trouble single-handedly. Chris Wilder is yet to alight upon a pairing that looks capable of turning things around. One bonus is that Lys Mousset, another success story last term, is back. He is unlikely to start against Leicester on Sunday, though, and Wilder must be tempted to hand Rhian Brewster a recall. The 20-year-old has been in and out of the side since his expensive move from Liverpool and, while raw, he is a livewire customer inside the box. Perhaps a run in the side for their big summer investment would deliver some much-needed points.

While he may not trumpet it as frequently as Jürgen Klopp, Sean Dyche is so concerned with the litany of injuries suffered by Burnley players that he has launched an internal investigation. Nick Pope, Robbie Brady, Josh Brownhill, Jack Cork, Phil Bardsley and Jóhann Gudmundsson were all absent from last weekend’s shellacking at Manchester City, continuing an injury-hit year for Dyche’s side. “Sometimes you get these periods of injuries,” said Dyche. “Maybe it’s just one of those things, but we are analysing it and we are working closely with the sport science and the physios to see if there are things we’re not quite fathoming out.” Pope, who missed the City game through the concussion protocol, should be back for this weekend’s game against Everton, while Brownhill and Bardsley are also expected to be available.

5) Will Ancelotti stick or twist with formation?

Carlo Ancelotti kicked off his spell in charge of Everton with a Boxing Day win over Burnley and could scarcely ask for more accommodating opposition as his team try to emerge from the rut that has followed their blistering start to the season. A laboured win over Fulham halted a run of three consecutive defeats for Everton, who subsequently squandered enough chances to win several games in an entertaining defeat against Leeds. Ancelotti has switched from 4-4-2 to a 3-4-3 in their past two games, a formation that left them vulnerable at the back but helped them bag three goals against Fulham and register nine shots on target against Leeds. Rather than abandon it, Ancelotti may opt to stick with it against a team mired in the bottom three.

The renewal of a north-south rivalry that dates back to the late-1960s heyday of Ron “Chopper” Harris and Norman “Bites Yer Legs” Hunter will not be met by the white-hot atmosphere of yore. A socially distanced crowd of 2,000 will be spread sparsely for a fixture last staged in May 2004, a 1-0 home win courtesy of a Jesper Gronkjær goal that was the last act of both Claudio Ranieiri’s Chelsea tenure and Leeds’ top-flight status for 16 years. The two clubs’ trajectories have finally brought them back together and Frank Lampard, Chelsea’s midfield general that Saturday afternoon, is in charge of a team that has become the stingiest in the Premier League. Meanwhile, Leeds have kept clean sheets in their last two matches, and did a real number on Everton last week. Lampard will be reunited with Marcelo Bielsa, with whom no love was lost in the ‘Spygate’ scandal that took place during the Londoner’s time at Derby. Were Leeds fans allowed in, their feelings for Chelsea’s manager would have been made clear.

7) Parker to repeat plan that did for Leicester?

A textbook counterattacking performance helped Fulham to a confidence-boosting win over Leicester and Scott Parker’s side will need every ounce of belief available to them for their trip to the Etihad to face Manchester City. Parker tried a 5-4-1 formation on Monday, his focus on nullifying the threat of Jamie Vardy, Youri Tielemans and James Maddison, then attacking at speed on the break. Having enjoyed such success he is likely to go with it again and it could conceivably yield further dividends if his side catches the City defence on one of their increasingly frequent off-days.

8) Pereira and Zaha will be key at Hawthorns

Zaha or not Zaha? That is the question for any team about to face Crystal Palace. Despite the signing of Eberechi Eze, Palace remain heavily reliant on Wilfried Zaha, whose absence in their last two matches led to sorry defeats against Burnley and Newcastle. If he is not fit enough to play this weekend, then West Brom will be even more confident of following up their maiden league win of the season with another. They will hope that Matheus Pereira plays as well as he did in last weekend’s victory over Sheffield United, when the Brazilian constantly created havoc for the opposition with his tricky dribbling, astute passing and precise set-piece deliveries.

Who are the team currently occupying fifth place in the Premier League after 10 games, and what have they done with the real West Ham? Among many people’s favourites for relegation before the season began, David Moyes’s side have now won three games on the spin, prompting speculation their manager has finally got his mojo back since it deserted him six years ago at Manchester United. It is his former club who travel to the London Stadium this weekend, where they will face a Hammers collective bolstered by shrewd recruits and all apparently pulling in the same direction for a manager many considered to be a beaten docket. On the pitch at least, West Ham are far from the basket-case outfit many predicted before the season began.

Graham Potter is sure to tell his players to be extra careful on Monday. Only Fulham have committed more fouls in the Premier League this season than Brighton, who would be best advised not to give away free-kicks within 30 yards of goal, ie James Ward-Prowse territory. Southampton could be boosted by the returns of Nathan Redmond and maybe even Danny Ings, who resumed training this week. Brighton will have Tariq Lamptey back from suspension and can expect another dominant performance from Yves Bissouma, who has grown into one of the league’s most accomplished midfield generals. Brighton have not beaten Southampton at home since 2012 but have a good chance of changing that – so long as they tackle smart.