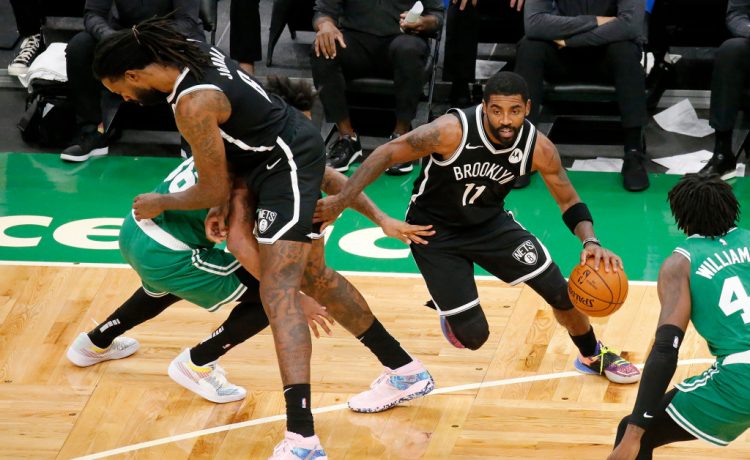 First Kyrie Irving cleansed the energy on the TD Garden court. Then he and the Nets wiped the floor with the Celtics.

Irving’s departure from Boston had been heavily scrutinized and highly criticized. But before the tipoff of his first game back, he circled the court burning sage, a spiritual ritual intended to cleanse a person or space, while promoting healing. Then, Irving showed just how healthy he was.

After a shoulder impingement cost Irving both of the Nets’ road games against Boston last season — the latter one actually in the NBA’s bubble — he teamed up with Kevin Durant to lead Brooklyn to a 113-89 preseason finale rout Friday night. And even though there were no salty Celtics fans to boo him, the star guard put on a show.

Irving had 17 points, seven rebounds, five assists and finished a game-high plus-29. Durant had a game-high 25 points, six boards and three blocks. They helped the Nets to a 32-point lead after three, and sat out the fourth.

“Coming here is easy, man. Performing here is easy. Basketball’s the easy part. It’s the external stuff beforehand that gets a little noisy. That’s how I limit that,” said Irving, who seemingly kept good relations with a number of ex-teammates despite being vilified by Celtics fans.

Irving is part Native American through his late mother and grandmother, who were members of the Standing Rock Sioux tribe. And while saging cleanses energy, Irving said it wasn’t something he pulled out specifically for Boston.

“It just comes from a lot of native tribes, being able to sage, just cleanse the energy, make sure that we’re all balanced and we come into this job and we come to this place,” Irving said. “It’s not anything that I don’t do at home. … I saged last game, and I plan to sage almost every game if the opposing team will allow me.”

Durant — who looked spry with breakaway dunks, baseline drives into contact and stare-down 3s — confirmed in a TV interview that it’s common practice for Irving.

“That’s his thing. Kyrie probably sages his room before he plays NBA 2k,” Durant said. “That gives us good energy. He does it in the locker room. That’s his thing and we all respect him and respect his methods.”

The methods are working. The Nets’ scrutinized defense held Boston to 32.9 percent shooting, and 6-of-40 from 3. The Nets hit 15-of-32 from deep themselves, and with the opener Tuesday versus the Warriors — followed by a Christmas rematch in Boston — they looked ready.

“I have no choice but to be ready,” Durant said. “But I feel all right. I feel like I’ll get better with more and more reps, especially with regular-season intensity. To start the season every team is going to be playing extremely hard, so I want to see how I get through that first stretch and throughout the middle of the season and play towards the back.”

Caris LeVert — who missed the preseason opener with a knee injury — debuted with 18 points off the bench. Joe Harris bounced back from a quiet game against the Wizards to score 14.

The Nets took command early with a 19-4 run over a four minute span, spurred by their defense. They forced four turnovers to turn a tenuous three-point edge into a 33-15 cushion that proved insurmountable.

Durant’s drive and dunk capped an 18-0 run to close the third and give the Nets a 92-60 lead going into the fourth.

With Kemba Walker out for the Celtics, Jayson Tatum had 19 and Jaylen Brown 16. But the Tatum shot just 5-of-17, while Brown was a minus-21 going up against Durant.

“It was good. We made we’ve made some strides defensively, we were connected, better recognition of situations, but most importantly competed, played together,” Nets coach Steve Nash said.

“Kevin and Ky were great. We gave them some more minutes in their legs, rhythm looked good. Those guys are in good position to start the season. Not ideal with a short preseason, but considering what we’ve been able to put together here in 18 days we can’t ask for much more.”

Points, punts and the breakdown: key areas to watch in Six Nations crunch