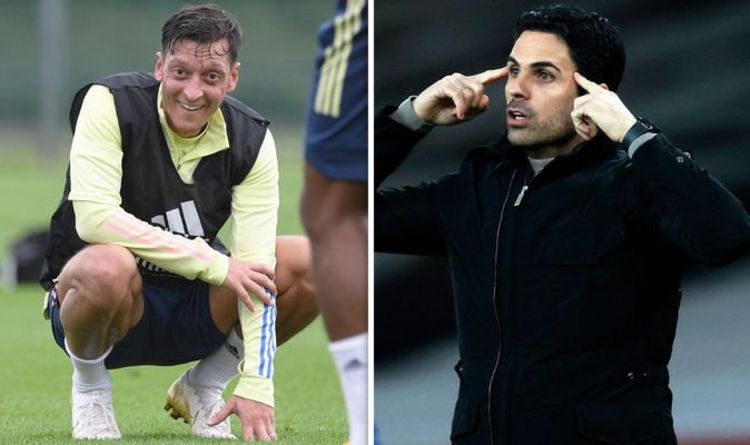 Arsenal playmaker Mesut Ozil insists he wants to see Mikel Arteta turn things around at the club despite his current exile – and has made it clear he will be ready to return to the team if Arteta backtracks on his decision to leave out the German.

World Cup winner Ozil has not played a competitive match for the Gunners since March and has been excluded from the club’s 25-man Premier League and Europa League squads this term.

In his absence, Arsenal have desperately struggled in the league, losing eight of 14 games and scoring just four times in their last 10 league outings.

Ozil’s absence has created huge debate among Arsenal fans and football supporters generally with widespread uncertainty as to whether or not the 32-year-old is the answer to their problems.

But despite having previously hit out at Arteta’s treatment of him, Ozil insists he just wants Arsenal to get back to better form once more – and has said he would more than welcome the Spanish coach reversing his decision and bringing him back into the fold.

Speaking in a Twitter Q&A on Wednesday night, Ozil said: “It’s a very difficult time for everyone around the club – not just for me.

“The situation is frustrating for everyone. Of course I would wish I could help the team especially right now.

“But as long as I don’t get the chance I just hope that we get better results very soon again. But let’s stay positive.”

In another tweet, asked how his faith affects his football, Ozil added: “It helps me a lot during hard times.

“I’m praying before every kick off – for me and for my teammates especially that everyone stays healthy.”

While he said of ex-Gunners boss Arsene Wenger: “He was really a fantastic manager – yeah, and also like a father figure for me and many other players. I think many people around Arsenal are really missing him.”

Ozil’s apparent backing of Arteta in his aforementioned tweets come despite the former Germany international having hit out at the Arsenal manager back in September.

Then, in a social media statement, Ozil said: “This is a difficult message to write to Arsenal fans that I’ve played for over the past few years.

“I’m really deeply disappointed by the fact that I have not been registered for the Premier League season for the time being. Upon signing my new contract in 2018, I pledged my loyalty and allegiance to the club that I love, Arsenal, and it saddens me that this has not been reciprocated.

“As I have just found out, loyalty is hard to come by nowadays. I’ve always tried to remain positive from week to week that there’s maybe a chance to get back in the squad soon again.

“That’s why I kept silent so far. Before the Coronavirus break I was really happy with the development under our new coach Mikel Arteta.

“We’ve been on a positive way and I was say my performances were on a really good level. But then things changed, again, and I was no longer allowed to play football for Arsenal.

“What else can I say? London still feels like home, I still have many good friends in this team, and I still feel a strong connection with the fans of this club.

“No matter what, I will keep fighting for my chance and not let my eighth season at Arsenal end like this.

“I can promise you that this hard decision won’t change anything in my mindset – I will continue to train as best as I can and wherever possible use my voice against inhumanity and for justice.”

With Arsenal languishing in 15th in the Premier League table headed into Christmas, Ozil will hope Arteta changes his stance and offers him a chance to break back into contention from February onwards.