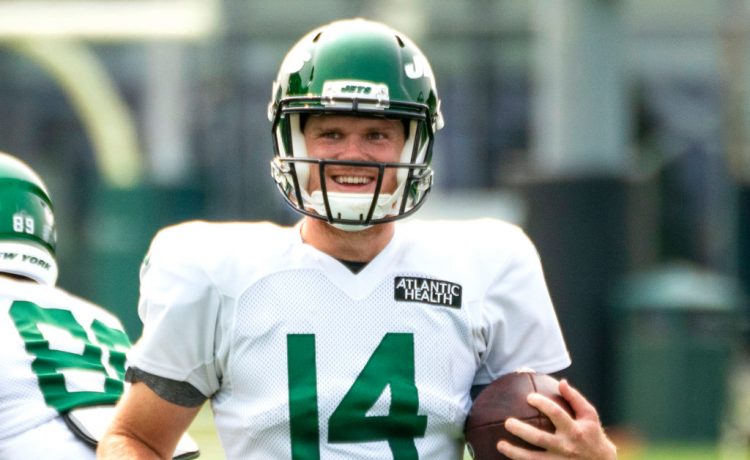 What if Sam Darnold performs in these final two games the way he did Sunday in Los Angeles?

What if the Jets maligned third-year quarterback is as assured and decisive as he was in the shocking 23-20 upset victory over the Rams?

What if Darnold throws for 300 yards and three touchdowns and doesn’t turn the ball over and the Jets beat the 10-4 Browns in their home finale Sunday at MetLife Stadium?

What if he follows that up by going up to Foxborough, Mass., next week for the season finale and makes Bill Belichick’s Patriots defense see ghosts?

What if Darnold’s 2020 résumé is capped off by three consecutive strong, winning performances — even if they came at the end of an otherwise miserable 3-13 season?

They will have been three meaningless wins for the Jets, but would they be meaningless performances by Darnold?

Before the upset of the Rams, the assumption was that the Jets were destined to finish 0-16, guarantee themselves the No. 1-overall draft pick and the chance to choose Clemson quarterback Trevor Lawrence.

With Lawrence, the supposed “generational talent’’ staring them in the face in April, there was going to be little decision for the Jets about what to do with Darnold. They would move on. Darnold would be traded for whatever the Jets could get for a third-year quarterback with a 12-24 record and 44 turnovers.

Barring an unexpected stumble in the next two games (against the Bears and Colts) by the 1-13 Jaguars, who by virtue of the Jets win in LA and Jacksonville owning the tiebreaker for the No. 1 pick because of strength of schedule, they will get Lawrence.

Now the Jets must ask themselves this question once this season comes to an end: Are they better off building around Darnold (which they’ve done a poor job of in the past three years) or rolling the dice on a college quarterback not named Trevor Lawrence?

What if Darnold shines this Sunday and next?

Does that change the narrative or will that be simply dismissed as garbage time?

“Every game is important for evaluation in the NFL,” former Jets general manager Mike Tannenbaum told The Post on Wednesday. “Look, they’re going to have to make some important decisions in the offseason — most notably starting at quarterback. The big question they’re going to have that a lot of people have about Sam is turnovers. Right now, Sam has 44 turnovers since he’s been in the NFL. That’s the sixth most of any quarterback in that time period.

“It’s not unlike Daniel Jones,’’ Tannenbaum went on, referring to the Giants second-year quarterback with turnover problems. “When those young quarterbacks don’t turn the ball over, they both give their teams a reasonable chance to win. We’ve seen that consistently for both teams.”

Weird statistic on Darnold, though: Of his 36 career starts, in the 14 he hasn’t thrown an interception, the Jets are just 3-11.

That’s a result of too many bad teams around Darnold and it raises the question: Have the Jets failed Darnold more than Darnold has failed the Jets?

The answer to that question is: Yes.

That, however, doesn’t exonerate Darnold from the fact that he hasn’t been special, hasn’t elevated the players around him the way a No. 3-overall draft pick should.

On Sunday in LA, Darnold did that, though. His quick and correct decision-making was the difference in the game. Was that a flash in the pan, a blip on the radar? Or a sign that he’s starting to figure it out?

“I thought Sam looked real good Sunday against the Rams,’’ Tannenbaum said. “He was decisive and accurate. That was a very encouraging performance.’’

It was only the fifth game this season he’s had all three of his top receivers — Jamison Crowder, Breshad Perriman and Denzel Mims — on the field with him at the same time.

Head coach Adam Gase was asked Wednesday what the “next step’’ is for Darnold.

“Just keep playing games like that,’’ Gase said, referring to the Rams game.

The question, of course, is which roster will Darnold be on in 2021?