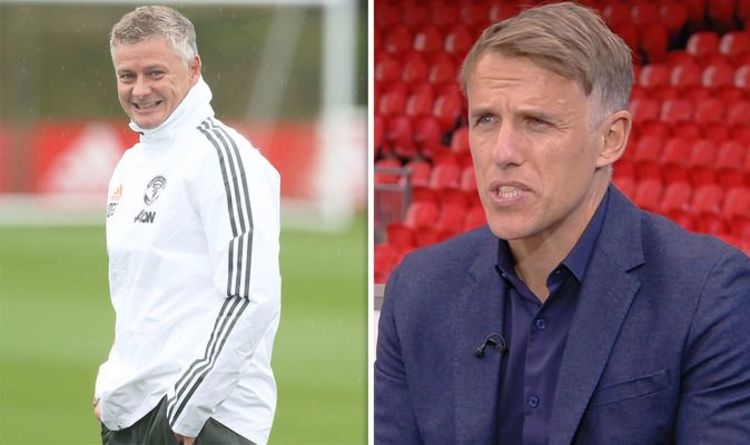 Manchester United are behind Ole Gunnar Solskjaer, Phil Neville has claimed. The Norwegian has been tipped for the sack by many supporters in the wake of his side’s 3-2 Champions League defeat to RB Leipzig on Tuesday night. The Red Devils have been dumped out of the tournament and will now have to settle for a spot in the Europa League instead.

United headed into their match against Leipzig knowing they just needed a point to reach the knockout stages of the competition.

But they slipped to a difficult defeat in Germany, with goals from Angelino, Amador Haidara and Justin Kluivert giving Julian Nagelsmann’s side all three points.

In the aftermath of the result, many supporters have called on Solskjaer to go.

The club legend guided them into the Champions League last term but has overseen a turbulent start to the current season, with the Red Devils also inconsistent in the Premier League.

But Neville has insisted the ‘narrative inside the club’ is different to the one outside of it.

“There’s an awful narrative where the minute United lose a game it seems like a disaster,” he told BBC Radio 5 Live.

“It’s not a disaster tonight, but it’s disappointing. United wanted to be in the last 16.

“There are Manchester United teams in the past with better managers than Ole Gunnar Solskjaer – like Sir Alex Ferguson – which have gone out at this stage. It does happen, it has happened.

“It’s quite a freakish time at the moment. There are managers in the Premier League who are below United in the league but have great reputations and don’t get the stick Solskjaer gets.

“If United win on Saturday – and Ole’s teams tend to do well in big moments, I think Saturday is a big moment for the manager and for the players.

“They played poorly in the first 30 minutes, they got punished in a group which was really really difficult and they’re out of the competition. They’re now in the Europa League, they’ve got to go out and win that.

“The narrative from inside the club is far, far different to that outside the club, where it seems there’s a total witch-hunt to get this boy out of the job.”

Solskjaer, speaking afterwards, expressed a belief United were too slow out of the blocks.

Leipzig went 2-0 up early on and the Red Devils only managed late goals from Bruno Fernandes and Paul Pogba when the game was already beyond them.

“We started too late. Great spirit and comeback again but different to the Premier League. You can’t give a team a three-goal lead and expect to come back,” he said.

“Just too late. Unlucky towards the end. I thought the character and effort was there. I thought it was in at the end.

“We weren’t good enough. In a difficult group of course, we started really well in this group, but the big defeat to us was the defeat away to Istanbul.

“That’s the one we look back at and lost the points we should have had. Today we were close, we knew we had to defend crosses and balls in the box but we just couldn’t clear them.”

“As a footballer you can’t feel sorry for yourself,” he continued.

“You have to feel sorry for yourself for a few minutes tonight but we have to focus on Saturday. We have a big game on Saturday, that’s the one we have to look forward to.”

United are next in action against Manchester City on Saturday (5.30pm).