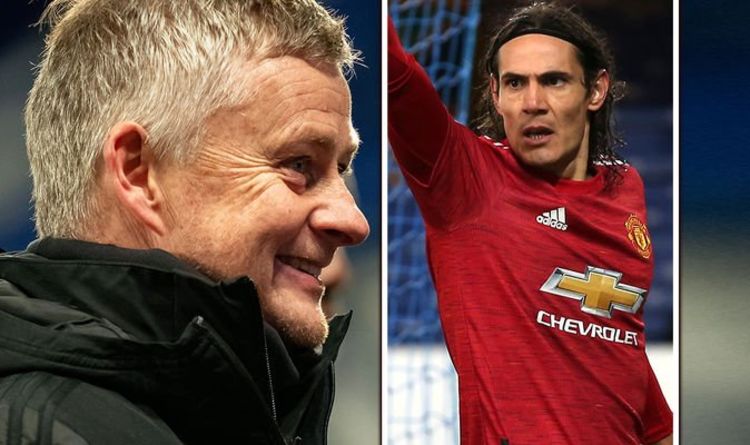 Manchester United boss Ole Gunnar Solskjaer believes Edinson Cavani should have scored more than one goal in their 2-0 Carabao Cup quarter-final win over Everton on Wednesday. Cavani scored the vital opener in the 88th minute at Goodison Park before Anthony Martial sealed the victory in stoppage time. United will now host rivals Manchester City in the semi-finals.

Cavani’s goal was a beautiful strike with his left foot, cutting in off the right and curling past Robin Olsen’s outstretched right arm in the Everton goal.

But Solskjaer says the former Paris Saint-Germain star could have scored a few more after missing a number of chances in the first half in particular.

Asked what he thought of Cavani’s goal, Solskjaer told Sky Sports: “Not bad.

“Which one? Maybe the three he should have scored in the first half!

“But no, he’s a top striker. Movement, quality, and of course the left-foot strike was excellent.”

Cavani was also embroiled in a moment of controversy, where he appeared to grab Everton defender Yerry Mina around the throat.

With VAR not in use, the striker got away with it after the officials seemingly missed the incident.

But Solskjaer insisted there was nothing in it between two old rivals.

“No, it’s two South Americans that have had a few battles before, not long ago,” Solskjaer said.

“I think they met in the Copa America qualification, so no, no, no.

“This was a proper game of football with fans, with some tackles, yellow cards, chances at both ends. So I enjoyed it.”

United captain Harry Maguire was impressed with his side’s performance and says it is important they end their near four-year wait for silverware this season.

Maguire told Sky Sports: “It was an excellent performance and we should have been out of sight, we had three or four great chances. We need to be more clinical.

“Edinson Cavani’s finish was excellent on his weak foot too. He’s had an injury but it’s good to have him back, he’s been a top striker throughout his career.

“We are expected to win trophies. It’s important to reach these big games but we have to start winning them and lift some trophies for this club.

“We controlled the game and fully deserved the win.”

Meanwhile, Everton boss Carlo Ancelotti thought his side were unfortunate not to reach the last four.

“We did enough to win – good performance we needed to defend which we did well but more in the second half,” Ancelotti said.

“We had a difficult start but after 20 minutes the game was under control – we didn’t play enough attacking football but we had to defend and until the last 20 minutes we did that well.

“They had more control, better quality so the game was to defend well which we did, we had some opportunities on the counter-attack but that was the game that we planned.”