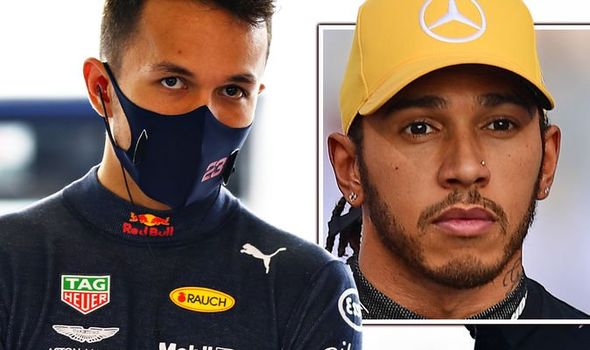 Lewis Hamilton has appeared to take a dig at Alex Albon following his axe from Red Bull. Red Bull announced on Friday that Sergio Perez had replaced Albon and will be the new team-mate for Max Verstappen from the 2021 season. Albon will now be a reserve driver following a disappointing 2020 campaign, where he recorded two podium finishes.

Hamilton was named the FIA Personality of the Year on Friday evening.

Ahead of the ceremony, the Mercedes star had his say on Perez replacing Albon.

And Hamilton appeared to suggest Albon didn’t threaten him or team-mate Valtteri Bottas in their races against each other.

“With respect to Alex in the races that we’ve had it’s been me and Valtteri against Max,” Hamilton said.

“I’ve been in the position that Max was in once, particularly when I was at McLaren where I was the lead car, and the second car wasn’t in the fight so when we’re fighting Ferrari, they could move around with the strategy and make it a lot harder for us.

“So I think naturally this makes Red Bull stronger – particularly the way Sergio is performing.

“Sergio has driven incredibly well this year, and truly deserved a drive, so I was so happy to hear that he’s been taken on by one of the top teams, and given this opportunity.”

Perez left Racing Point at the end of the season and was replaced by Sebastian Vettel.

Hamilton is looking forward to him and Bottas going up against Perez and Verstappen next year.

“I think it’s going to be an exciting battle to watch him up against Max,” Hamilton continued.

“And that’s going to make it much harder for us as a team.

“So we’re going to have to really step up our game, because that’s going to be a battle we’ve not seen for some time, in terms of having the two drivers there, fighting against us.

“But we relish that as a team, that’s what we work towards. We love the challenge, and it’s gonna make it that much more exciting.”

After signing his deal with Red Bull, Perez revealed his excitement to get going with his new team.

The Mexican said: “I am incredibly grateful to Red Bull for giving me the opportunity to race for Red Bull Racing in 2021.

“The chance to race for a championship-contending team is something I have been hoping for since I joined Formula One and it will be a proud moment to step onto the grid in Red Bull colours alongside Max.

“You can be sure that I will give next season my full focus. The Team has the same winning mentality as me and I know I am here to perform and help the Team fight for another title.”