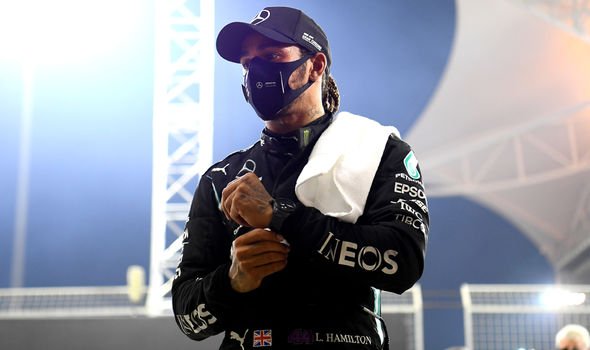 Lewis Hamilton has revealed he is hoping to return to action this weekend at the Abu Dhabi Grand Prix after his period of isolation. The seven-time world champion was forced to withdraw from last weekend’s Sakhir GP after returning a positive coronavirus test last Monday.

Hamilton woke up with mild symptoms and decided to take another test as a precaution, shortly after testing negative.

To his dismay, it came back positive as Mercedes chief Toto Wolff was forced to think on his feet and negotiate a release clause with Williams for George Russell.

It nearly paid dividends in Bahrain, as Russell came agonisingly close to recording a memorable maiden victory in the Middle East.

Now Hamilton is hoping to be back behind the wheel this weekend in Abu Dhabi for the 19th and final race of the season.

He addressed his supporters with a video on Instagram, in which he said: “Hi everyone, hope you’re all well.

“I know I haven’t been in touch this past week, It’s definitely been one of the hardest weeks that I’ve had for some time.

“I’ve just been focusing on recovering and trying to get back in shape so I can get back in the car and race the final race in Abu Dhabi.

“I woke up today feeling great, so I just wanted to send you guys a message of positivity and letting you all know that I’m okay.

“Thank you to every one of you that sent me the amazing messages and videos. I really, really appreciate it. I hope that wherever you are, you’re staying positive and fighting through whatever you’re facing right now.

“I hope that I can get back in the car soon and I’m sending you guys love.”

Hamilton is understood to be facing a number of obstacles ahead of his potential return to action.

His period of isolation is set to be completed on Thursday, just a day shy of practise at the Yas Marina circuit.

But before regaining entry to the paddock, Hamilton and the rest of the Mercedes team will have to return multiple negative tests as part of normal protocol.

Furthermore, there are tight restrictions on criteria for travel between Bahrain and Abu Dhabi for F1 personal, who are granted special permission to skip the 14-day period of isolation for arrivals.

When asked if Hamilton could be granted special dispensation to return in Abu Dhabi, FIA race director Michael Masi made it clear that the decision may ultimately rest with the country’s authorities with F1’s protocols secondary to the United Arab Emirates’ criteria.

“It is not so much a rule change from an FIA regulatory perspective,” he said.

“The main part, through all of this, has always been complying with the respective government’s laws and regulations.

“So it is effectively, two government entities that need to determine the entry criteria.

“If he meets the entry criteria of the two governments and further complies with the testing protocol from an FIA perspective, to test negative prior to entering the paddock, then there are no problems from our perspective.”