Kyrie Irving is a Nets leader no matter what he says 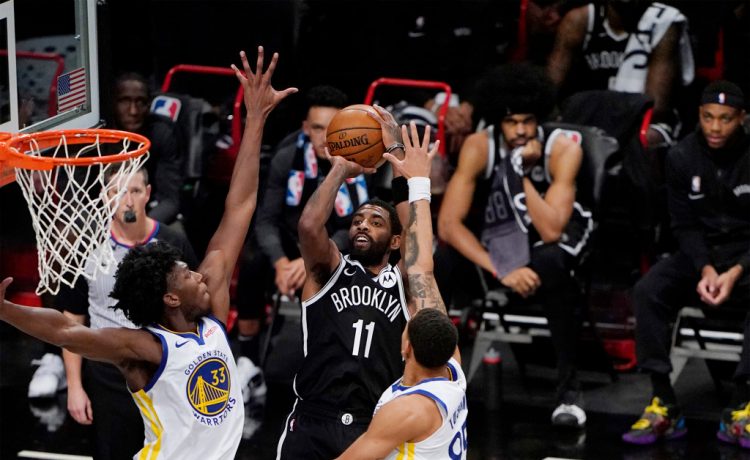 Before the Nets opened the season against Golden State, all the attention was on Kevin Durant’s Achilles. Now with Kyrie Irving’s Christmas Day return to Boston, the scrutiny will be on the All-Star’s attitude.

Irving will demure he’s not the Nets leader. Salty Celtics fans will claim he couldn’t lead if he tried. But here’s the thing: The way Brooklyn is built — with Durant’s quiet nature and the departure of several steadying veterans — Irving is going to be looked to whether he wants to admit it or not.

“You look up after practice and Kevin, Ky are always out there. Caris [LeVert] is following them closely and is extremely hard-working,” coach Steve Nash said. “Our guys have great routines, they have great focus and they definitely are influenced by the amount of work and effort that Kevin and Ky put in.”

While both Durant and Irving put in work, Durant is laconic and Irving is loquacious. The irony is that while Irving has had issues speaking (or not speaking) to the media, his star status combined with vocal nature has cast him not only as a vice president of the Players Association but a leader of the Nets locker room.

“Kevin doesn’t say a whole lot. He talks when he needs to, but he’s much more a lead-by-example-type guy. He definitely leads by the way he works, the way he approaches the game, the way he supports his teammates. Ky is a little more vocal,” Nash said. “He’s the head of the snake in that respect, and is able to lead guys in talking them through things, pointing and directing.

“So, he also is mentoring players. They’re both great examples. They have different styles. Kevin is much more laid-back. I think Ky is willing to mentor, talk guys through things. … They’re slightly different. It’s amazing when your top players work as hard as they do and set an example. That really is leadership.”

In his youth, Irving admitted he fell into playing too much hero ball, and he also chafed under LeBron James’ leadership in Cleveland. Then when Irving himself was asked to guide the Celtics, he acknowledges struggles in doing so. It contributed to clashes with some teammates, and an ugly exit.

On Christmas Day, Irving will play his first regular-season game in Boston since joining the Nets in June 2019. Learning from clashes with Celtics teammates, he’s taking pains to avoid sound bites and present a unified Nets front of egalitarian teamwork. Even if those teammates admit they’re looking to him.

“We just need to continue to give knowledge when needed to these players that are thirsty for it. These guys here want to win just as bad as us. We have that winning mentality and attitude. It’s easy for me to fall in line and follow direction.”

LeVert is one of those players thirsty for knowledge. He joined Irving and Durant to give the Nets three 20-point scorers in an opener for the first time since 2007. And with LeVert often seen as a potential third star in Brooklyn, Irving has taken his young teammate under his wing.

“He’s on me; he’s on me each and every day. It’s always truthful, its always real. It’s always the right — not necessarily what I want to hear — but it’s the right thing to say. So I definitely cherish that, for sure.”