Knicks take big step back in preseason loss to Pistons 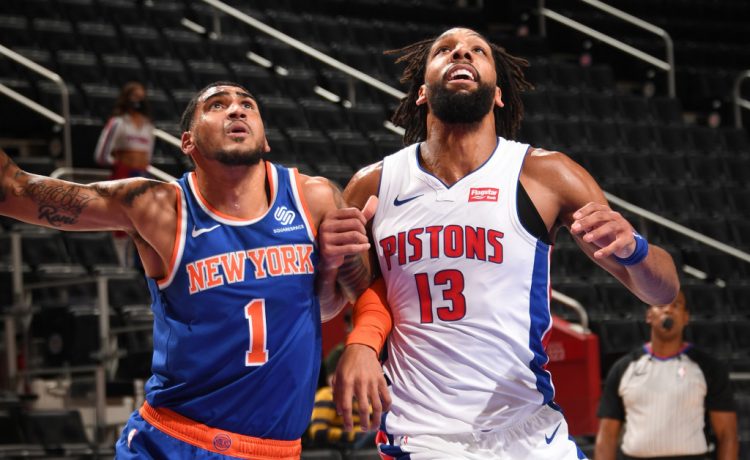 Knicks coach Tom Thibodeau was anxious to see his team respond to the same Pistons club again — just as they would in a playoff series.

He wound up disappointed in Sunday’s rematch, as the Knicks were outworked early, faded late and didn’t look close to a playoff team in a dispiriting 99-91 loss to the Pistons at Little Caesars Arena in Detroit.

After a solid preseason debut Friday, the Knicks played well for just one quarter and saw some of their key young players underwhelm.

“We had one good quarter of basketball,’’ Thibodeau said. “After the first game, we had 35, 36 minutes of good basketball. So we regressed.’’

Rookie lottery pick Obi Toppin crashed to Earth in his second game, and the Knicks’ defense wasn’t nearly as strong as it was in Thibodeau’s Knicks debut.

Toppin, Kevin Knox and Dennis Smith Jr. combined to shoot 3-for-20 as the Pistons coach Dwane Casey made adjustments to a 2-3 zone, daring the Knicks to shoot from 3. The Knicks were 8-for-33 from 3-point land (13-for-56 for the two games).

“I like the situation we just went through because you’re playing the same team,’’ Thibodeau said. “Usually, you win a game against an opponent, and you play them again based on experiences in playoff basketball, that team comes with an edge. I felt that would happen. It did. I felt we were back on our heels at the start of the game. The start of the game really got us in a hole.’’

Thibodeau kept the same starting lineup, and the unit had them afloat in the second half. But the Knicks’ bench was dreadful, and the Knicks scored 16 points in the final frame in a woeful offensive outing.

Toppin came off the pine to score just four points on 1-for-9 shooting — including 1-for-6 from 3. He looked less lively, though Thibodeau didn’t care about his lack of shotmaking.

“I don’t know if he was less active,’’ Thibodeau said. “When the ball doesn’t go in for you, it can look that way. There’s ups and downs in a season. We have a lot of players who measure everything with how it’s going offensively for them. You can’t do that in this league. There’s some nights you shoot the ball better than others. When you don’t shoot it well, you have to have an understanding you can play well by doing other things.’’

Alec Burks (15 points) started again at small forward and led a third-quarter rally in which the Knicks took the lead before they folded in the fourth quarter. The Knicks set the wrong tone by allowing a 31-point first quarter and trailed by 15 in the second period.

RJ Barrett had a strong evening (25 points, 10-of-17 from the field) but blew a transition layup with 4:30 left after a Julius Randle steal.

The Knicks had shown many good signs in holding Detroit to 84 points Friday but didn’t show the same panache.

It was an off-kilter night for 2018 lottery pick Knox (1-for-6, two airballs). Reserve center Mitchell Robinson picked up five fouls in his first 11 minutes. Smith, the backup point guard, showed little knack for organizing the offense and shot 1-for-5.

“Some good and some bad tonight,’’ Thibodeau said of Smith’s play. “He wasn’t on the floor at the start of the game, and that’s what set the tone. [In] the second quarter, we got swallowed up, didn’t make good plays.’’

After trailing by 10 at halftime, the Knicks played with more spirit to start the second half, upping their defense and outside shooting.

“They played harder than us at the beginning of the game,’’ Barrett said.

Barrett pumped in 11 points in the third quarter, and Burks added nine in making three 3-pointers.

The Knicks rallied to take a three-point lead and were tied after three quarters at 75, but the young bench couldn’t continue the momentum.

The Knicks’ defense was a lot less intense than in Friday’s big win. Blake Griffin, on the second possession, drilled a wide-open 3-pointer, and Derrick Rose and Delon Wright dribbled through for easy lay-ins.

But on this night, the offense was more to blame.