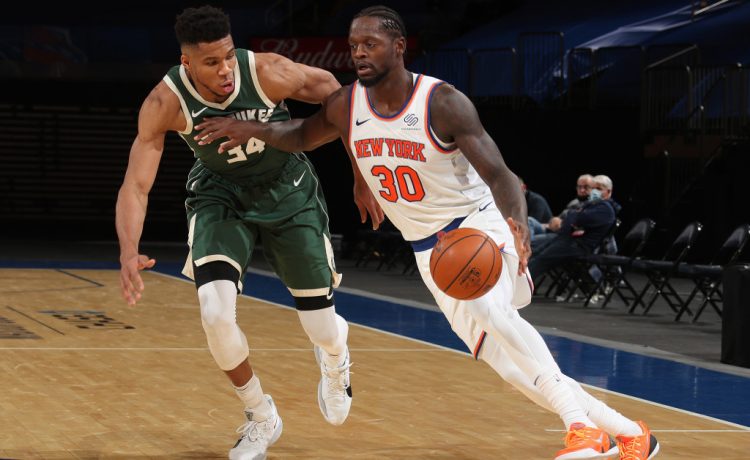 Julius Randle’s answers on Zoom are short. He’s not auditioning to be a thoughtful orator like he was last season — his first as a Knick.

Is Randle disappointed media and fans have viewed him as a trade chip for a star? A turnover-prone scoring forward who dribbled too much last season and didn’t make his teammates, including RJ Barrett, better?

Randle certainly took umbrage. And that may have been further exacerbated by the notion his minutes may be in jeopardy because of the drafting of another power forward at No. 8 overall, Obi Toppin.

Indeed, Randle has seemed a touch surly with his one-to-three-word Zoom answers. Maybe he just doesn’t like Zoom.

But on the court, Randle is speaking volumes. He’s been a monster — a much-improved, slimmed-down, smarter wrecking ball.

With the Knicks off to a 1-2 start and embarking on a four-game road trip starting Tuesday in Cleveland, Randle has enjoyed three golden games — averaging 23.7 points, 10 rebounds and 6.3 assists.

Randle is still listed at 250 pounds, but his work in Dallas during the pandemic has appeared to reduce that figure.

“Go into the summer, improve and come back better,” Randle said when asked about his season’s first three games.

In the Knicks’ season-opening loss Wednesday against the Pacers, Randle posted nine assists. The coaching staff believes if Randle didn’t get in foul trouble late in the third quarter, the Knicks may have pulled out the game. They fell apart after he departed.

In the stunning 130-110 Garden rout of the Bucks on Sunday, Randle gave Giannis Antetokounmpo all he could handle. Randle’s final count: 29 points, 14 rebounds and seven assists.

Toppin? The rookie missed his second straight game and could be out another two weeks with a calf strain. Even when he played, Toppin looked like he had a lot to figure out about how to score inside like he did at Dayton.

Randle isn’t perfect. He had four turnovers versus the Sixers in the home opener. But the 6-foot-9 southpaw is getting close to being something special.

“[Randle] has the ability to put it on the floor and you have to make the read at the basket,” Knicks coach Tom Thibodeau said. “What are they doing? Is there two or three guys on you? If there are, hit the open man, trust the pass. When you do that the game becomes very easy.”

Since the OTAs in September, the Knicks coach has raved about Randle’s leadership. The quiet Texan didn’t seem much of a leader last season — first out of the locker room after games.

The pressure was on, too, after signing a three-year, $60 million pact. Only $4 million is guaranteed next season.

Last season, Randle gave detailed answers on having to adjust to double- and triple-teams for the first time in his career. It never happened with the Pelicans or Lakers, for whom he was a lottery pick.

When asked whether he’s figured that out more after Sunday night’s triumph, the 26-year-old Randle said curtly, “Just make other players better.”

Marcus Morris was the Knicks’ top closer until he got traded last February. Randle’s production and efficiency picked up after Morris left but nobody could have foreseen this current jump in his seventh season.

The factoid Randle doesn’t want to hear is he’s been on only losing clubs in his previous six seasons. Perhaps that’s where a winner like Thibodeau helps most.

Randle shot just 27.7 percent from 3-point range last season, but his off-balance 3 to close out the first half against the Bucks was huge and provided a 16-point cushion. It’s a small sample size, but Randle is hitting his 3s at a 55 percent clip (5-for-9).

“He works really hard, he works extremely hard,” Knicks point guard Elfrid Payton said. “He watches a lot of film. So it’s only a matter of time before he continues to make more jumps and more jumps in his game. He’s letting the game come to him. The game is slowing down for him. He’s going to be huge for us this year.”