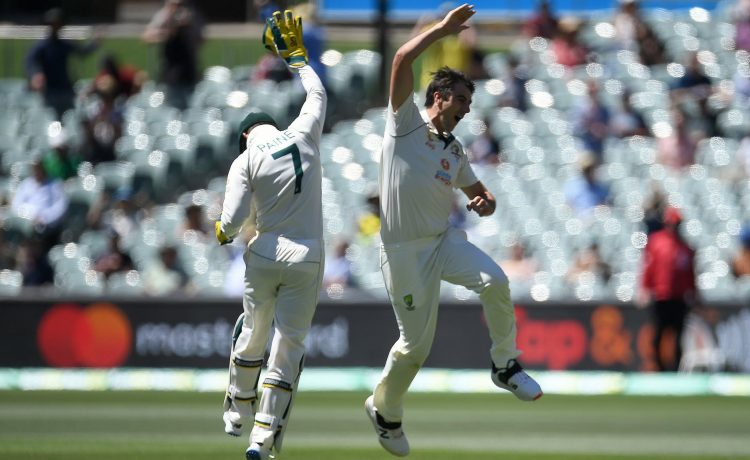 Australia cruised to an eight-wicket win in the first Test at Adelaide Oval, where Pat Cummins and Josh Hazlewood produced spells for the ages to skittle a shellshocked India for their lowest Test total in history.

Tim Paine’s team secured a 1-0 series lead before the dinner break on day three of the pink-ball Test, hauling in a target of 90.

The tourists were out for 36 in their second innings after Mohammed Shami retired hurt, having been struck on his exposed right arm by a brute of a ball from Cummins.

Shami was rushed off for scans and the paceman’s injury is among a glut of concerns for India, whose captain Virat Kohli will soon fly out for the birth of his first child.

The visitors resumed at 9-1 on Saturday, leading by 62 runs. Cummins (4-21) and Hazlewood (5-8) created unmitigated chaos in the ensuing 90 minutes, during which no batsman reached double figures.

“We arrived today and just collapsed, completely … it’s very hard to find words for how everyone is feeling,” Kohli said. “Literally an hour, you put yourself in a position where it’s impossible to win. It really hurts.”

Nathan Lyon would be excused for having flashbacks to the unforgettable Test collapses he was part of in Cape Town (2011) and Trent Bridge (2015), where Australia were all out for 47 and 60 respectively.

The shoe was on the other foot for the offspinner in Adelaide, where he never looked like getting a single over in the second innings as Cummins and Hazlewood celebrated career-defining moments and big milestones.

“It shows the talent we’ve got with the ball,” Paine said. “When you’re as tall and quick as your boys are and they get it right like that, it can be an absolute nightmare.”

Mayank Agarwal’s nine and Hanuma Vihari’s eight helped India surpass the 26 that New Zealand mustered in 1955, which remains the lowest score in 150 years of Test cricket. But Kohli suffered the ignominy of leading the XI that set the bar below the 42 India scored at Lord’s in 1974, which had been the nation’s lowest score from almost 550 Tests.

Cummins ignited a barely believable collapse of five wickets for four runs when nightwatchman Jasprit Bumrah chipped a catch back to him. The express paceman had Cheteshwar Pujara out edging, for a duck, while Kohli became his 150th wicket in Test cricket.

Hazlewood was on a hat-trick after removing Wriddhiman Saha and Ravichandran Ashwin, and made Vihari his 200th Test scalp.

“Everything went to plan,” Hazlewood said. “The way Patty started was unbelievable.”

Wade fell victim to a tidy piece of keeping from Saha, while Marnus Labuschagne gifted Ravichandran Ashwin a wicket, but India’s body language throughout the final innings was that of a vanquished side. Burns brought up his half-century, and the winning runs, with a six when Bumrah dropped a catch and the ball sailed over the boundary.