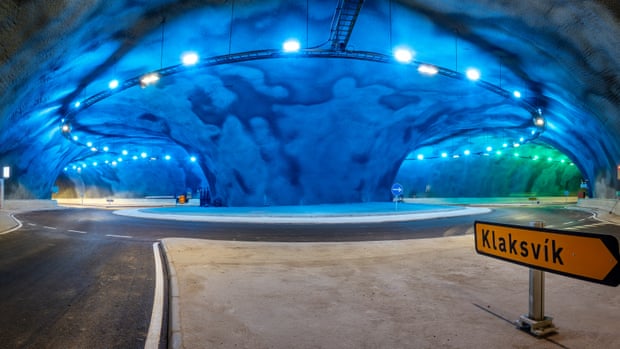 This is no ordinary roundabout. Looming at the end of an 11km-long tunnel under the North Atlantic, it looks like a giant jellyfish, illuminated with aquamarine lighting and surrounded by lifesize dancing figures.

Aside from its striking appearance, it’s been called the first underwater roundabout, sitting at a junction of the newest of the tunnels that link the two most populous Faroe Islands: Streymoy and Eysturoy. It marks the geographical centre of the Faroe Islands, and could even become a draw for foreign tourists.

“We think people will drive through the tunnel just for the experience,” says Teitur Samuelsen, CEO of the Faroese tunnel company that raised the €360m for the Eysturoyartunnilin and another, of similar length, which will connect Streymoy with the southerly island of Sandoy in 2023. That’s an investment of around €50,000 per inhabitant, financed by the Faroese government and private venture capital from abroad.

The tunnels are the Faroes’ largest infrastructure project and another example of the fast-paced economic development of these islands, which have seen a rapid expansion of the capital Tórshavn and a big increase in international tourism – albeit stymied this year by coronavirus. In spite of the downturn, two new hotels opened in Tórshavn this autumn (the Hilton Garden Inn, and Hotel Brandan), doubling the city’s bed capacity, and Atlantic Airways, the national airline, received its newest Airbus A320neo in June.

When travellers do return, they will find it easier, and quicker to reach the much-less-visited northern islands, which are currently about 90 minutes drive along winding roads around the fjords. The new tunnel cuts the driving time from the capital to the second biggest settlement – the fishing port of Klaksvík – in half, meaning some of the tourism revenue should spread beyond the capital region.

“We hope this new infrastructure will help spread some of the tourism benefits more widely around the north-east of the Faroe Islands,” says Visit Faroe Islands director Guðrið Højgaard, “and perhaps encourage Faroese businesses to cater for visitors more.”

While some local residents fear that the new tunnel will result in traffic jams in the tiny capital (which only has three sets of traffic lights), one potential benefit is that it may slow or arrest the depopulation of some of the Faroes’ smaller settlements. The drive behind the ambitious tunneling network is partly about keeping communities on smaller islands viable. The 1,200 residents of Sandoy, many of whom work in the capital, rely on a small car ferry, but this is sometimes cancelled due to the Faroes’ changeable weather and high winds.

The Eysturoyartunnilin is due to open officially on 19 December, but early photographs of the new roundabout have appeared on social media, prompting several thousand people to say they want to visit the islands just to see it. The “jellyfish” central pillar is natural rock, left behind during the blasting but contributing to the tunnel roof support.

The illuminated rock is being decorated by a prominent Faroese artist, Tróndur Patursson. An 80-metre steel sculpture represents figures holding hands around the roundabout. They stare inwards at the light like worshippers around a volcanic fire. At first I took them to be huldumenn, the mysterious troll-like creatures who are said to inhabit the mountains and live in caves. However, Patursson says the linked figures represent the Faroese “ring dance”, where hundreds of people come together in a circle holding hands. “The figures are walking from darkness into the light,” says Patursson, “And they symbolise the very Faroese idea that by joining hands and working together we achieve great things.”

Patursson, 76, attracted international attention in 1976 when he volunteered to join Tim Severin’s voyage recreating the journey of Ireland’s Saint Brendan, who is thought to have reached Newfoundland long before Columbus. Crossing the Atlantic in a leather-hulled curragh is an experience that Patursson has said influenced his artistic output, and engendered his fascination with the ocean.