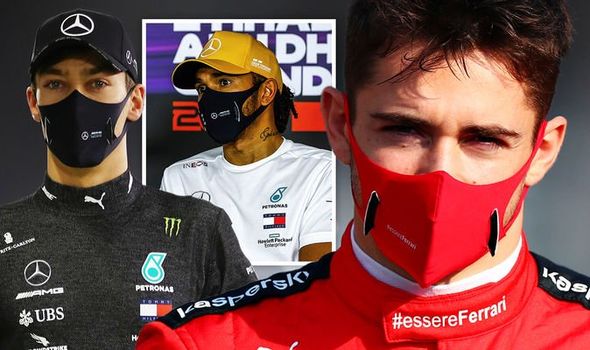 George Russell impressed when he stood in for Lewis Hamilton at Mercedes for the Sakhir Grand Prix. The 22-year-old looked on course to win the race on two occasions before a nightmare pit stop left him down the field.

Ferrari star Charles Leclerc has revealed he was not surprised and backed Russell to win the race.

The Monegasque was laughed at by some for predicting the Williams star could pick up a victory.

Leclerc has opened up on just how fast he knew Russell was and was not surprised at how impressive he was in Bahrain.

It led to calls for Mercedes to replace Valtteri Bottas with the Brit for the 2021 season.

“I think some had doubts,” said Leclerc about Russell’s prospects at Sakhir, during an interview with Il Giornale.

“I would have bet on his victory and when I said it many laughed.

“I know George from the karts and I know how fast he is. I had him as a team-mate in 2011 and things don’t change. Even 10 years later, if you were fast you will stay fast.”

Russell will drive for Williams again in the 2021 season but enhanced his reputation with the race for Mercedes.

He achieved the fastest lap in finishing ninth but could so easily have won the Grand Prix.

Mercedes managed to put the wrong tyres on Russell’s car meaning he had to come in a second time to fix the error.

He then suffered a puncture to drop him way down the field and out of contention for the victory.

“It’s hard to know how good they are until they step up towards the front of the grid – not only to see if they are fast enough but also if they can handle the pressure of being up at the front,” said Ricciardo on the In The Fast Lane podcast.

“George didn’t need to get pole [in Bahrain] to kind of prove he’s got the talent, but he was so close.

“I think the more impressive thing for him was to get a good start, get into the lead and control a big part of that race. That’s where he really earned his stripes.

“I think he proved that yes, the car is amazing and whatnot, but he proved he is certainly the real deal. He’s one of those younger kids that I think has now proven himself.”

F1 is now on the winter break before the 2021 season gets started.

The Australian Grand Prix gets things underway on Sunday, March 21.