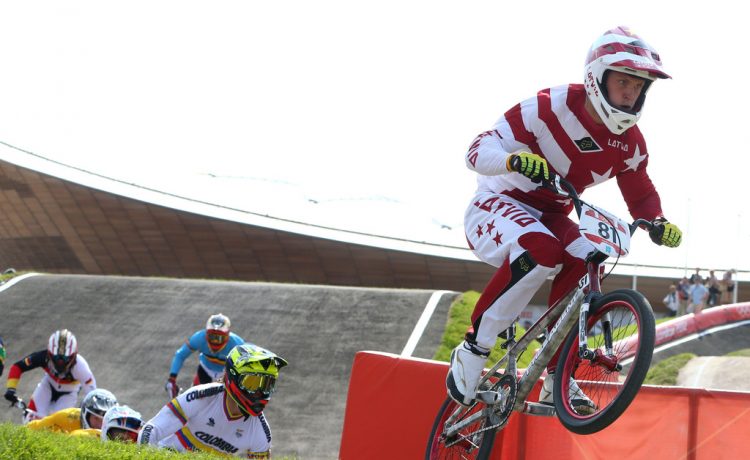 In much of the world, the end of the year and the beginning of the new one are times of festivity, with many different celebrations taking place. But what do all these celebrations have in common? They’re a chance to wear nice clothes, make yourself look good and enjoy yourself along with friends and family.

It isn’t always easy to find the perfect outfit, but worry not! Athletes from the past and present are ready to inspire you with the outfits, haircuts and accessories they wore at the Olympics.

In the fifth part of this series, the protagonist is a BMX racer with two gold medals, Maris Strombergs. In his second Olympics at London 2012, the Latvian caused a sensation with his colourful maroon and white outfit with big stars and bold stripes.

Many athletes design competition outfits that are inspired by the colours on their country’s flags. Latvian rider Maris Strombergs took it to the extreme with a uniform that used the two colours of his nation’s flag, maroon and white, and added big stars and stripes to stand out on the track. Clearly, the striking outfit brought luck to the rider, who in London 2012 won his second consecutive gold medal.

Strombergs arrived at the United Kingdom as the favourite. Four years earlier in Beijing, he was the first Olympic men’s champion in BMX racing. He completed the Olympic 2008 BMX course in about 36 seconds and the Olympic 2012 one in 37.576 seconds.

BMX racing is essentially a contact sport, and riders need the most protective gear with a full-face helmet, gloves, goggles and long-sleeved protective clothing all used. But they also need to stand out, and it is normal for them to wear brightly coloured outfits to be easily recognisable.

Strombergs certainly succeeded in standing out in the race with a uniform that was perfectly identifiable and without any doubts, unforgettable.