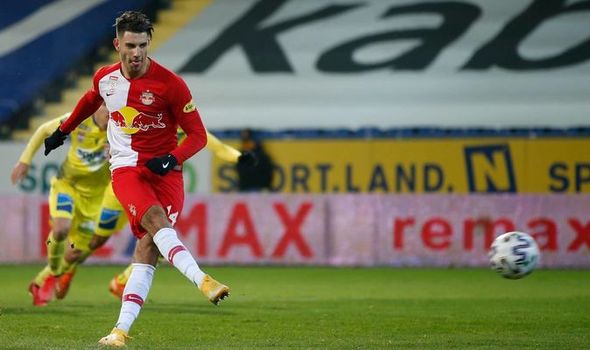 Arsenal transfer target Dominik Szoboszlai dropped a huge hint over his future ahead of a potential January move to the Emirates on Thursday night, fans believe. Arsenal beat Rapid Vienna 4-1 in the Europa League, and Szoboszlai’s reaction was quite telling.

Arsenal are believed to be preparing to make a move to sign Szoboszlai during the January transfer window.

The Gunners have struggled domestically this campaign, and are currently 14th in the table after their worst start of the Premier League era.

Mesut Ozil has been ousted by Arteta and appears unlikely to ever play for the team again, leaving the Spanish boss with a difficult hole to fill in his midfield.

Arsenal are expected to target a creative midfielder during the January window, with Christian Eriksen and Szoboszlai both targeted.

Eriksen, 28, is available after struggling to settle at Inter Milan following his move from Tottenham last January, and could be purchased for roughly £12million.

But Szoboszlai is much younger – only 20-years-old – and could be a more attractive option for Arteta as he builds his side for the future.

And the youngster appeared to hint that he would be open to a move on Thursday night.

Arsenal fans were quick to notice that Szobodzlai had liked a picture on Instagram illustrating the Gunners’ 4-1 drubbing of Rapid Vienna.

However, he may have had an ulterior motive behind his social media activity.

Some fans noted that RB Salzburg, Szoboszlai’s current team, are arch-rivals with Vienna, and that him liking the post could have been a subtle hint at the Austrian side.

McGarry said: “It’s our information that technical director and former Arsenal player, and legend it has to be said, Edu, is backing Arteta to the hilt during meetings with club administrators and the heads at the club who make decisions.

“He has said that he believes firmly that Arteta is still the right man for the job. And indeed Edu has been looking at recruitment for January in the form of a right-sided centre-back and a creative midfielder.

“It’s our information that the Hungarian international Dominik Szoboszlai and, would you believe, former Spurs playmaker Christian Eriksen, are two of the players being considered for the creative midfield role.

“That is where Arteta has identified they’re falling short, in terms of providing what is potentially a very potent attack force in Pierre-Emerick Aubameyang, [Alexandre] Lacazette, but also of course because Aubameyang is failing to fire this season the way he did last season.”