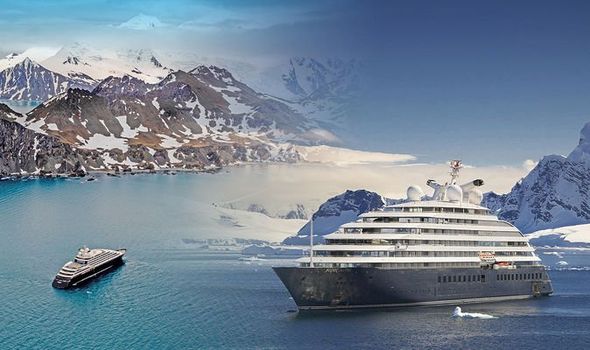 Though cruise-lovers may be eager to get back onboard, Mr Gower points out new covid-secure rules make it difficult for operators to tick all of the boxes and still provide the same experience.

“Social distancing is just not going to work on a cruise, unfortunately, and the only way you can do that is to reduce capacity,” he continued.

“If you reduce capacity it all comes back to: How are you going to make any money out of it?

“It is like airlines – unless an aircraft is 80 percent or more then an airline is not making any money.”

He also believes there will continue to be an element of fear for some travellers.

“I think just the sheer scale and size, there are so many people on some of the big cruise lines which will just scare people,” Mr Gower continued.

Earlier in the year, some cruise lines made the decision to attempt a return to the ocean.

Though successful in some cases, news reports of fresh coronavirus outbreaks began to circulate, offering yet another blow to the industry.

Hurtigruten’s ship MS Roald Amundsen was one of the first cruise ships in the world to resume operation after lockdown.

However, just days into its voyage the virus was detected among staff, forcing the cruise line to cancel the rest of the journey.

It was not alone; most recently Royal Caribbean was also forced to abandon its “cruise to nowhere” after a passenger was thought to have tested positive for coronavirus onboard.

Outbreaks such as these lead the Department for Transport (DfT) to warn it is still “not the right time” to restart cruises.

According to Mr Gower, these warnings are reflecting within bookings.

“What a lot of cruise lines are doing is releasing programmes and cruises earlier than usual. Trying to get forward business I suppose.”

Despite the warning against cruises, the Government has said it will focus on working to help cruises resume safely with the help of its new “Travel Taskforce”.

“The cruise sector, with Government support, has spent the last seven months learning lessons from the pandemic and putting in place new protocols and industry guidance to create a COVID-19 safe environment onboard,” stated a DfT report.

It continued: “However, since then there has been a significant rise in COVID-19 cases in the UK and abroad.

“Against this context, it was rightly considered that now is not the right time to see the resumption of cruise operations from the UK and the FCDO continues to advise against sea-going cruise travel based on the latest medical advice.”

Despite this, some cruise lines are pushing to begin “trial” sailings to test out COVID-19 measures.

Though Mr Gower admits there is a “risk element”, it’s a move he thinks can only be beneficial.

“It can only help and people will be either choose to take notice of it or not, but if they do those sorts of things they will make sure that they go well.

“They can not afford for anything to go wrong so they will bend over backwards to make sure the experiences are right because they want the press to say such a thing.

“There is no room for error because the worst possible thing would be if they got bad press out of it.

“That would hold things back a lot more.”

He continued: “There is a risk element but unless you talk positively about improvements and progress, it is becoming safer and safer, you have got to keep pounding away that drum. And people will eventually understand it and get onboard.”

There is good news ahead though. While Mr Gower thinks it will take longer for ocean liners to return, he is confident some cruises will recover quicker than others.

“I think small cruises with fewer people like river cruising things like that I think that will move quicker,” he said.

“There is less risk.”

However, even as optimism begins to show within the travel industry, Mr Gower adds: “I think there has been a huge underestimation around the devastation that has been caused to the industry as a whole, let alone the understanding of the revenue and the economic impact of lack of tourism.

“I don’t think that has been really understood.”