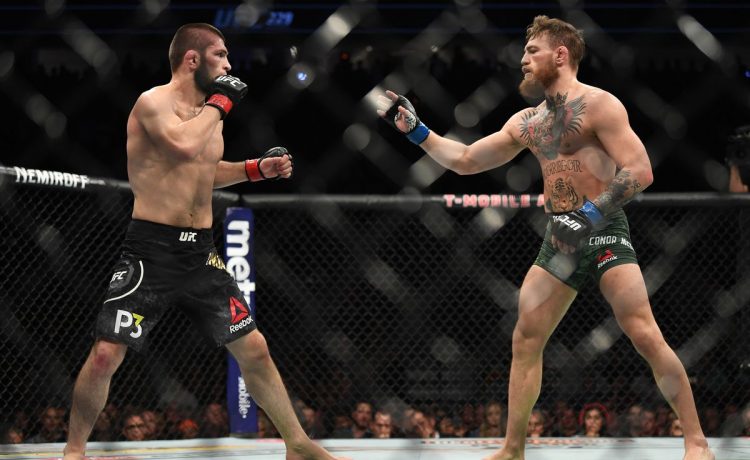 Conor McGregor was convincingly beaten by Khabib Nurmagomedov during their heated bout in October 2018 but the Notorious has hinted he may want to exact revenge on his retired nemesis.

McGregor taunted Nurmagomedov’s faith and family before he suffered a fourth-round submission defeat to the Russian.

The tension was so high leading up to the fight that the aftermath exploded as members of both camps stormed the Octagon and punches were thrown.

It was thought the two MMA stars would have to be kept apart in future events because of fears they could cross the line once again.

McGregor retired from the UFC for a short while Nurmagomedov continued to defend his lightweight titles, extending his unbeaten record to 29 wins.

However, following his most recent victory over Justin Gaethje in October, the Eagle surprisingly announced his retirement.

The 32-year-old lost his father earlier this year and he no longer wants to fight without him in his corner.

McGregor, who returns to action against Dustin Poirier on January 23, has suggested he wants Nurmagomedov to return to action.

The message has since been deleted but it is believed it references UFC chief Dana White and Nurmagomedov’s manager Ali Abdelaziz.

McGregor’s next tweet read: “Robert Earl Britton is The Man!”, which refers to an alias that Abdelaziz used to register with the United States Anti-Doping Agency.

Abdelaziz then replied with: “Wrong, The Eagle is,” which suggests Nurmagomedov could return for a second fight.

But first McGregor must focus on trying to get the better of Poirier next month, just like he did in 2014.

Nurmagomedov vacated the lightweight belt when he retired and Poirier thinks it should be on the line for his clash with McGregor.

“I feel like Khabib’s a guy of his word. If he says he’s retired, he’s most likely retired,” he said.

“Number two is Gaethje, I got a win over him. I feel like me and Conor could potentially be for the belt.

“I’m a former interim champion looking to get some gold back around my waist.

“Conor is a former undisputed world champion in the lightweight division.

“Both of our last defeats were to the current/’retired’ world champion. So I don’t know.”