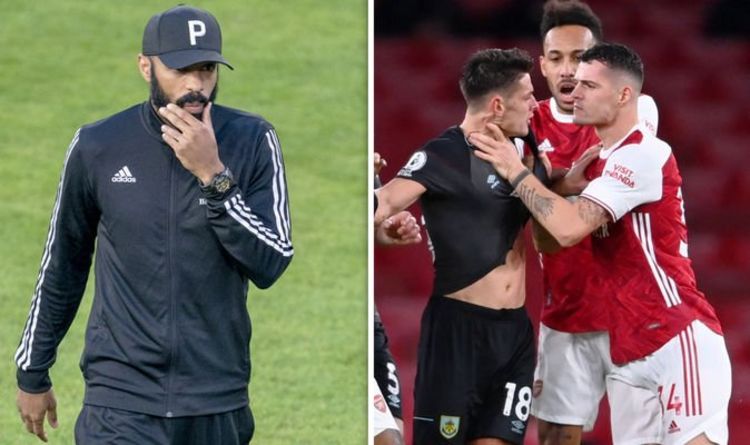 Arsenal legend Thierry Henry once reacted to seeing Granit Xhaka captain his former side by switching off the TV, according to Manchester United hero Patrice Evra. Sky Sports pundit Evra made the revelation following Arsenal’s 1-0 loss to Burnley on Sunday, where Xhaka was sent off for violent conduct. The Gunners have now lost their last four league matches at home for the first time since 1959.

Xhaka has been a regular under Mikel Arteta this season and won back some supporters following his angry reaction to being substituted in a match against Crystal Palace last term.

But the Switzerland international has done himself no favours after being sent off for grabbing Burnley midfielder Ashley Westwood around the neck in the 1-0 loss to Burnley.

Evra was critical of Xhaka after the match and revealed how Arsenal’s all-time top scorer Henry reacted when he saw the 28-year-old captain his former team in a previous match.

“We’re talking about Xhaka, I will tell you a quick story,” Evra said on Sky Sports.

“Thierry Henry, one day he invited me to his house. He said ‘come Patrice, we’re going to watch the Arsenal game’.

“He turned on the TV, the first image we saw on the screen was Xhaka leading the Arsenal team, being the captain.

“Thierry Henry turned off the TV. I said: ‘What’s happened?’. He said: ‘I can’t watch my team and Xhaka being the captain of my team’ and we didn’t watch the game, we started talking about many things and he turned off the screen.

“He’d tell you everything about what the legends of this club think about him. He again let down his team.

“We criticised [Nicolas] Pepe so much but Xhaka, it’s not the first time.

“I remember even two years ago, I made a comment about Arsenal saying ‘They still look like babies’ and he came out [and said] ‘Patrice Evra, it is not the first time he spoke about us’.

“I remember, the next game he gets substituted and he take off his shirt and he throw it on the floor. So, we had enough of Xhaka. I think Arsenal fans have had enough of him.”

Arsenal remain 15th in the Premier League table, having scored just 10 goals in 12 matches this season.

But Evra says he does not have any sympathy for the Gunners players during their bad run.

“Their religion doesn’t allow them to score goals and when you don’t score you don’t win, but I would focus more on their attitude. Before it was Pepe and today it was Xhaka.

“There is a lack of discipline about Arsenal and Arteta must be fuming right now.”