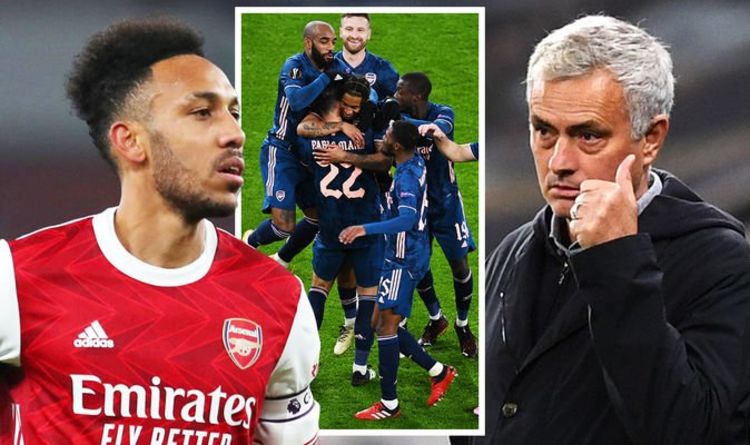 Pierre-Emerick Aubameyang believes that a win in the north London derby on Sunday could mark a turning point in Arsenal‘s troubled season and says he and his team-mates have been “waiting” for Sunday’s showdown (4.30pm kick-off).

The Arsenal striker is expected to return to the team after missing out on Thursday night’s morale-boosting 4-1 Europa League win over Rapid Vienna, which ensured the Gunners won their group as they moved into the last 32 of the competition.

But Arsenal’s league form as they prepare for their crunch clash with their top of the table bitter rivals has been wretched.

They have suffered five defeats in their last eight games, and three successive losses at home, leaving them lying a worrying 14th in the table.

Aubameyang, struggling himself with only two goals this season since signing a new deal in September, believes a win over Jose Mourinho and Tottenham could provide the perfect platform for Mikel Arteta’s team to kickstart their season.

Aubameyang said: “This is the game that we have to make into a turning point for us this season.

“There’s nothing better than this game to give you that opportunity to turn things around. We have to understand that if we can win this game then everyone will change their mindset.

“A big result in the derby can really lift the players, the fans – everyone.

“We know it will be a tough game, they are playing well at the moment, but we have to take care of our game, how we want to play the game, and make it all about us.

“We are waiting for this game – we need to give everything to get the win and change our situation.”

The Gunners striker admitted: “We were not happy with our performance last week against Wolves. We showed two different faces.

“We completely missed the first half, we didn’t play our usual game, how we want to play, and that was really disappointing.

“There’s a lot of frustration because we know we can do a lot of things much better than we did.

“In the second half we showed more that we are capable of putting the opponent in difficult situations, we created some opportunities to score goals, but in the end we couldn’t do it.

“Our behaviour was better in the second half. We know what we have to do better from now on. The good news is we know exactly what we have to change. So it’s up to us to do it.”

Arteta added: “We’ve been really consistent in this competition [the Europa League] and I think the boys showed great energy, character and aggression today.

“Right from the beginning you could feel that they were touched from the last defeat and everybody individually played a really good game.

“Again we were in the final third really aggressive with the ball. We created many chances for goals and probably should have scored more.

“Now, let’s take that into Sunday a very special game, we’re all looking forward to it and let’s do it again.”