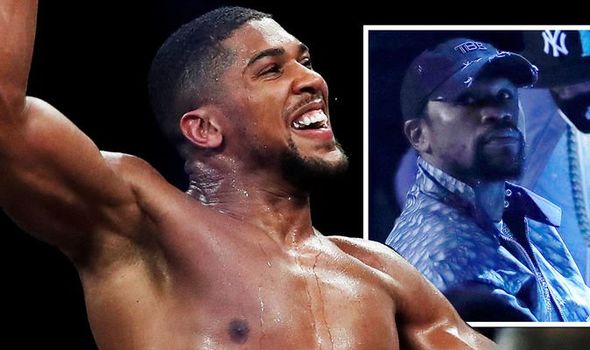 Anthony Joshua has opened up on some advice Floyd Mayweather gave him ahead of his fight with Kubrat Pulev last night. The American boxing legend was in attendance at Wembley as AJ retained his titles with a dramatic ninth-round stoppage.

Joshua will now look ahead to a dream bout with Tyson Fury to unify the four championships.

The last man to do that was Lennox Lewis but Joshua may have to face Oleksandr Usyk before he can think about his fellow Brit.

Joshua believes he thought about things differently after advice from the undefeated Mayweather.

“What can I say, this is the fight game, at the same time I’m not in competition with anyone apart from myself,” the 31-year-old told fans on his official YouTube channel.

“I’m staying true to myself, learning every day, I get older, I get wiser, I learn that this boxing game is chess and not checkers. I play a smart game and I make the right moves at the right time.

“Round nine, I got the knockout and onto the next.”

Mayweather praised Joshua ahead of his fight with Pulev and explained why he was at the fight.

“The UK is a great place, so many great fighters. I am proud of Anthony Joshua, and it’s lights, camera, action.

“He is one of the best heavyweights out there. Got a gold medal before. His career is going great, he is a hell of a fighter.

“Anything can happen in the sport of boxing, one shot can change it all. He is a great fighter, hell of a guy a gentleman and I respect his craft.”

Joshua retained his WBA, IBF, and WBO belts and will now look to his next challenge.

Promoter Eddie Hearn has confirmed he will do everything he can to setup a fight with Fury.

“There’s been a lot of talk,” Hearn told Sky Sports. “As he said, it’s less talk, more action. Since he came into the office, he wanted to be the undisputed champion of the world.