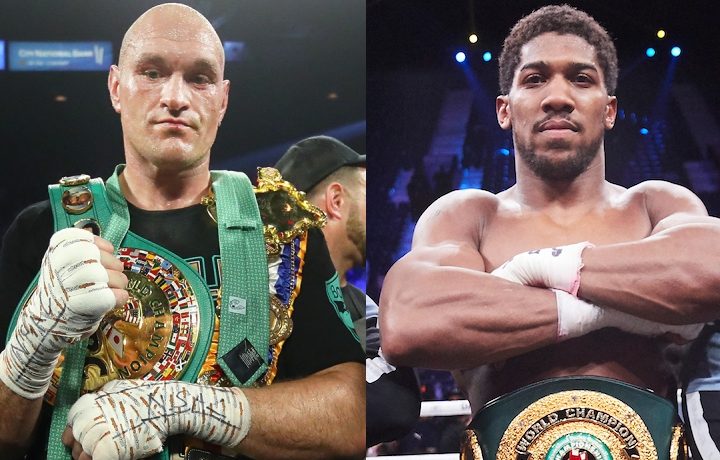 Anthony Joshua is gearing up to defend his WBA, WBO, IBF and IBOheavyweight world titles against Kubrat Pulev this weekend but a Battle of Britain clash with Tyson Fury is still dominating the agenda.

Eddie Hearn is working hard behind the scenes to try and strike a deal between the two British heavyweights.

Joshua is expected to cruise past the IBF’s mandatory challenger Kublev at The SSE Arena on Saturday night.

He then hopes to land a blockbuster unification showdown with WBC champion Fury.

However, Hearn does not want to wait until after the Pulev fight to get the ball rolling as he claims to be working tirelessly behind the scenes.

“Our job over the next couple of weeks, even before the fight [against Pulev] is to get that fight in place ready to go,” said Hearn.

“If AJ can be successful against Pulev, we want to be able to go to the governing bodies ‘Deal agreed, contracts signed and this is the proposed date, will you sanction it as an undisputed fight?’.”

There are many caveats which could disrupt AJ’s hopes of stepping into the ring with Fury, none more so than WBO mandatory challenger Oleksandr Usyk.

Hearn co-promotes the Ukrainian alongside Alex Krassyuk and they have already discussed potentially delaying that bout.

“I spoke to Alex last week, I was quite honest and I told him ‘if we get the Fury fight made we are going to be applying to the WBO to make that for undisputed and if they say no we have to go to you and try to make a deal’,” said Hearn.

“If we can’t make the Fury fight for any reason, then we will fight Usyk 100 per cent. They’re kind of waiting to see what happens.”

Another problem which could arise between Joshua and Fury is who will get one share of the purse.

Both men have publicly stated they would be happy to split the money straight down the middle.

Joshua has also claimed he would like the fight to take place in the UK – but that could mean missing out on a mammoth pay-day overseas.

“If they both say that, we do it in a heartbeat,” Hearn added.

“I just want to be honest with you. It’s not how it works in sport and especially not in the fight game. And by the way it shouldn’t.

“You’re basically saying this fighter should go in and put his health on the line without getting the maximum reward financially for that risk.

“To be honest maybe the coronavirus situation does favour a UK fight because we don’t need to talk to anyone to do a UK fight.

“If we receive an offer from another country that country has to be confident enough that it will be returning to a live, full capacity environment by the end of May/early June.

“Maybe those countries aren’t confident enough yet to make that kind of investment without that confidence that life will return back to normal.

“Perhaps that could favour a UK event, if everything is not running in the way that we hope it will be.”