HomeGamesAfros in Azeroth: the quest for diversity in World of Warcraft
Games

Afros in Azeroth: the quest for diversity in World of Warcraft 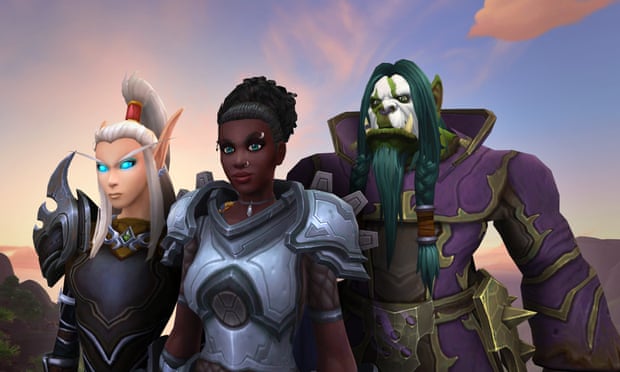 Recently, I’ve spent quite a lot of time pondering what an orc would look like with an afro. This, naturally, led to contemplation of an axe-afro-comb combo, and whether such a contraption would fall under blacksmithing or engineering.

That’s because I’ve been playing Shadowlands, the eighth expansion to World of Warcraft. For Warcraft fans, there’s a lot to be excited about: the new game allows players to explore the afterlife – reviving classic characters such as Kael’thas Sunstrider – and introduces a new style of play in Torghast, a deliciously punishing dungeon that changes each time you visit.

One of the biggest updates, however, is for everyone, old players and new: an overhaul of the game’s representation, with a range of new, more diverse options for characters’ appearances. While WoW players have always been able to choose from a limited range of skin tones, Shadowlands expands these, and adds racially appropriate facial features and hairstyles. In addition, players can now visually represent blindness, and change their gender.

With Shadowlands arriving on the 16th anniversary of World of Warcraft’s release, Hazzikostas is well aware the changes were long overdue. “Some of it was technical constraints, going back to the way things were built, and the number of different textures that could be mapped onto a single model from the engine 15 years ago. But those are lines of code that can be changed. And yes, the real question is why didn’t we do it sooner? It’s a good question. We should’ve done this sooner, honestly.”

With millions of players around the world, representation is essential, Hazzikostas says. “Since the start of the game, there’s a portion of our player base that’s been able to make a character that felt like their avatar in Azeroth, but there were many, many of our players – far too many, the majority, in fact – who couldn’t do that. And that’s at the core of why we’ve made this change.”

Rebuilding the game’s ageing infrastructure was just one element. The Warcraft team also needed to reconsider how they interpret the game’s high fantasy setting, balancing the imagination of the genre with the overwhelming diversity of World of Warcraft’s subscribers. “The reality is that Tolkien-derived fantasy, what we call traditional fantasy, so often reflects a western European ethos,” Hazzikostas expands. “It reflects works made for that smaller audience, that has since become globalised. Plenty of people could previously make a stout dwarf or a quirky gnome … but the skin tones to match the range of our players weren’t there. We’ve changed that.”

But if you want to be an orc with an afro you’re out of luck, since the new skin tones, features and hairstyles are mainly for the most humanoid characters. Humans, of course, have the full range of options, but a fantasy-alien draenei, for example, has none. It’s a compromise that might leave some players disappointed, but equally, it’s fair to say that Azeroth wouldn’t feel quite as magical if every character looked like a human.

Shadowlands also adds the first non-white non-player character to the game. At first, you’ll only find them in Stormwind – Hazzikostas admits this was a first pass to address the main thoroughfares – but he’s adamant that this is more than a token offering.

“I think what we’re effectively saying is, [let’s] pretend it was this way all along. It should have been this way all along. We’re going back and fixing something that should have been done 15 years ago. The one thing we didn’t do is change any specific named, known characters, because people have their direct associations with that name, but going forward as we introduce new leaders, new prominent characters, we’re going to make full use of the options that we have available.”

Needless to say, representation goes beyond just seeing your skin colour on screen, particularly when it comes to fantasy, given the genre’s problematic history of basing villainous characters on racist stereotypes. It’s an issue that’s left a number of publishers grappling with problematic legacies, so how does World of Warcraft avoid reductive tropes?

Hazzikostas credits a vocal team with a diverse range of voices as the first line of defence, but ultimately, he says, the Warcraft universe has always featured more nuanced character design in the fantasy realm.

“One of the things that I loved about [Warcraft] as a player is that the monstrous characters aren’t the villains, right? It’s inverting some of those well-worn stereotypes of art; you have the humans in shining armour, and you have the savage orcs over here. Well, no, the orcs are honourable, and driven. You know that they can be ferocious, but they’re fighting for family, for their homeland, and you learn their character and fall in love with that.”

It’s a legacy that players are fiercely protective of: the community is particularly vocal about any changes to a world which many of them, myself included, have grown up in. Knowing this, Hazzikostas publicly shared the team’s progress on Shadowlands to solicit suggestions, which helped the team decide where to focus their efforts. In fact, the specificity of players’ requests is what helps him do his job: breaking down the vast World of Warcraft player base by playstyle, or preference, means the team can make sure as many needs are met as possible.

“Let’s make sure we know who all these groups are, who play our game. And let’s make sure that we are doing something awesome for each of them,” he says. “As long as we’re being mindful of all of the different playstyles, all the different motivations, that contributes to, and helps knit together, this larger tapestry that is stronger as a result of having that diversity.”

And while some of the opinions on greater representation have been disappointingly predictable – Hazzikostas dismisses it as grumbling from the “usual internet crowd” – he says the response has been overwhelmingly positive. “Out of all the features that I have had any hand in working on in my dozen years at Blizzard, I can’t think of anything that’s been as universally well-received as the character customisation changes. And that’s just a reaffirmation of how important it was, and why we made it a priority as a team.”