‘A race against time’: Roger Federer in doubt for Australian Open 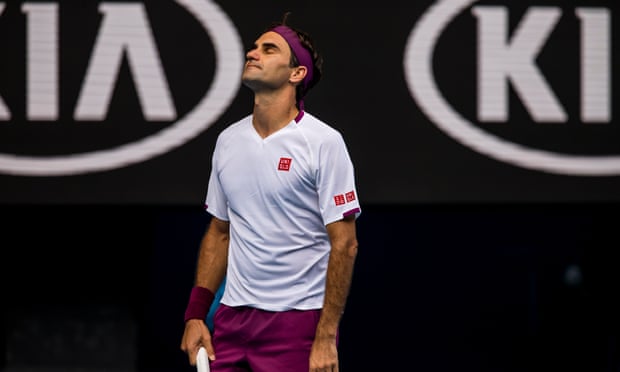 The biggest name in tennis is in doubt for the rescheduled 2021 Australian Open, with Roger Federer conceding that his recovery from a knee injury is taking longer than expected. The 20-times grand slam champion has not played since being injured en route to the semi-finals at Melbourne Park earlier this year.

He revealed at an awards ceremony in Switzerland that even the delayed start to the season’s first major, likely to be February 8 instead of 19 January, may not be enough time.

Turning 40 next August, Federer – a six-times champion in Melbourne – said his 2021 priorities remain Wimbledon, the US Open and Tokyo Olympics, where he will be bidding for a first singles gold medal, the only major prize still eluding him.

Federer underwent a second round of surgery on his right knee in the middle of the year, having suffered a similar injury during his five-set Wimbledon semi-final loss to Milos Raonic in 2016.

On that occasion, the Swiss marvel made an extraordinary comeback to win his fifth Australian Open crown in 2017 with an epic five-set final triumph over Rafael Nadal in his first official tournament appearance in six months.

Federer has contested a record 21 consecutive Australian Opens since losing in the first round of qualifying in 1999.

Tennis Australia is working closely with the Victorian and Australian Federal governments trying to finalise quarantine requirements for the some 2,500 players and their entourages.

Open director Craig Tiley said three weeks ago that he hoped to confirm the new starting date within a fortnight.

But Victorian premier Daniel Andrews almost daily has said the process is complex and that it is hoped an announcement confirming the 2021 Open will proceed will be made soon.

With Covid under control in Victoria, organisers are hoping crowd capacity may be up to 50%, from earlier expectations of 25%.