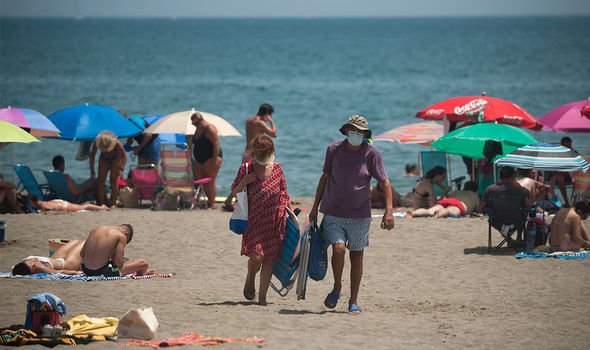 Planning a holiday has become an activity fraught with confusion and uncertainty in recent weeks as the result of ever-changing travel corridors. However, for many Britons who had been trapped at home for months, an opportunity for escape became worth the two-weeks mandatory quarantine period imposed by Boris Johnson.

Dr Toni O’Donovan was one of those travellers who made the decision to jet off to a destination which, at the time, had been revoked from the travel corridor list.

Despite this, she says that the experience did not feel as unsafe as the travel corridor fiasco might lead one to believe.

In exchange for her holiday, under the guidance current at the time, Dr O’Donovan and her family would face 14 days of quarantine upon their return home.

According to the Government, anyone caught flouting the quarantine rule can be fined up to £10,000.

Of course, this hadn’t even been a fleeting notion when Dr O’Donovan and her family had booked their holiday long before the coronavirus pandemic took its hold.

An annual trip to Fuerteventura is something they were due to enjoy alongside a group of 20 friends and family, including Dr O’Donovan’s parents who live in Ireland.

However, devastation struck when the Canary Islands were axed from the UK’s travel corridor list on July 25.

It was then that the family were faced with a difficult decision.

“We’ve been there the last six years and we had actually booked it prior to lockdown,” Dr O’Donovan explained to Express.co.uk.

“We booked it last February, so we booked it quite a long time ago, but then we had this.

“We were just really really undecided about whether we would go or not. For us, the big decision was we decided to take the kids out of school for two weeks.”

If they opted to walk away from their holiday, the family would have lost around £1,300 in the cost of plane tickets alone.

“We kind of changed our minds multiple times, and then in the end about four days before we said look let’s go otherwise we would be walking away from £1,300 in flights and it just was to big an amount to walk away from for the sort of downside of the kids being off school for two weeks,” she continued.

In the end, 14-days of self-isolation felt like a worthy exchange for two weeks of escapism in the sun.

“Others in our group, the friends that were going chose differently,” she said.

“And we were in the lucky position that actually with our work, for myself and my husband, we were both okay to work from home.

“That wasn’t the case for all of our friends.

“And my parents were supposed to come with us as well and they just said no – for them it was just too big of a risk.”

She added: “I think we all, in the end, were kind of comfortable with the decision we came to even if we made different decisions to each other.”

The decision was one that didn’t come without its research.

“We are based in Charnwood and the level here isn’t very high but I think it is high enough,” Dr O’Donovan explained.

Familiarity with the destination and plenty of opportunities to enjoy being outside also helped strengthen the family confidence in their decision.

“I guess it makes a difference as well that we were going to a place that we knew pretty well having been there multiple times before. And we know that it is kind of, we could live quite an outdoors isolated kind of active holiday there.”

Yet, no matter how much research they had done, it seems Dr O’Donovan and her family couldn’t quite anticipate just how safe the destination would be – despite not having earned its travel corridor yet.

“We didn’t realise quite how quiet it would be,” she said.

“The hotel only reopened after being closed for seven months on the day we arrived.

“And for the first few days, we were the only people in the hotel.

“It was odd from that perspective and it wasn’t what we would usually do but it was calm and it felt very safe.”

With fewer people willing to quarantine on their return home, the lack of travel corridor may well have been to thank for the calm and “safe” surroundings.

Dr O’Donvan pointed out: “Going to a country that was off the travel corridor meant that the flight was really quiet.

“I think going to a place that is on the travel corridor, the flight might be busier.

“You know, we were on such a quiet flight, and that was because so many people didn’t come because it wasn’t on a travel corridor.”

Along with fewer fellow holidaymakers to contend with there are also plenty of safety precautions in place within the Canary Islands.

“In Spain you have to wear a mask all of the time, but you adjust to that really quickly,” she said.

There were also elements of the hotel where things were slightly different.

The usual buffet service had been eliminated in favour of table service, meanwhile exercise classes were mostly taken outdoors, with the exception of one in which face masks were mandatory.

“I guess life in general at the moment is unusual,” said Dr O’Donovan.

“You know, you’re always experiencing things that are different.”

What’s more, some of these changes actually proved to benefit the holiday, as the holidaymaker explained: “Sometimes we go and we are on the go the whole time when we are on holiday, where as this time we were, I guess, a bit more relaxed and we just kind of let the time go to a certain extent and it was quite nice. It was quite calm and I think it was what we needed.”

Though the family had planned to quarantine on their return home, as luck would have it, there was an unexpected change just days before their departure.

“We travelled out on Saturday but we hadn’t booked to come back until Sunday 25 October. On Thursday they added the Canaries to the exemption list and they brought that in at 4am on Sunday.

“If we had come back on Saturday we would have had to quarantine anyway. That was just luck.”

She added, however, that this was something the family were fully “willing to do for the break”.

Whether the travel corridors work as a deterrent to stop Britons visiting “high risk” destinations is a confusing one.

“It acts as a deterrent to anybody who can’t quarantine when they get home. They just can’t go,” she said.

However, for those who are able to work from home, it eliminates many of the issues quarantine poses.

“Although it might seem it might be a deterrent to go to a place that is not on the travel corridor, we were actually quite grateful that we went to a place that was so quiet and felt so safe while we were there,” she explained.

“You wouldn’t expect it to be that way around really but that was the way that it felt.”

Admittedly, though, the decision comes down to whether quarantine is worth the escape.

“It’s a difficult one. I don’t envy anyone trying to make these decisions,” she said.

“We were really lucky. We completely acknowledge that and I really feel for people who haven’t been able to make the same decision as us for whatever reason.”