Real Madrid and Inter in fight for their Champions League lives 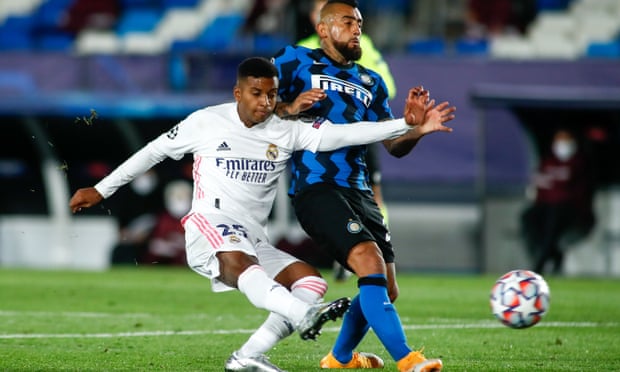 We’re still not a great team,” Romelu Lukaku said after Internazionale came from two behind to beat Torino 4-2 on Sunday. That’s the bad news for Antonio Conte’s team; the good news is that Real Madrid aren’t either. Wednesday night’s meeting between the two teams at San Siro in what was always likely to be the biggest match in Champions League Group B, just not like this and quite not this big. First place is not on the line, but survival might well be.

Inter are bottom, Real Madrid are second bottom. And although Borussia Mönchengladbach and Shakhtar Donetsk are not out of reach, nor is the possibility of failing to get through this phase at all. One thing seems likely now: they won’t both get through; the knockout phases will be missing one of the competition’s biggest clubs, members of the cartel that plots for a breakaway Super League where this kind of risk can be consigned to the past, protecting them from impudent football teams that dare to compete.

For Real Madrid, who consider this competition their own, so often their elixir, it would be the first time ever. A Europa League slot would be no consolation; in fact, they would rather not have it. They would have no ambition to reach the final as Inter did last season. And in pandemic times with budgets slashed, the impact could be significant for both of them. Madrid’s salary cap has already dropped by almost €200m. There is a reason they did not sign anyone last summer.

Madrid have been rescued twice already and almost produced another dramatic comeback in the opening game, but still aren’t safe – a life lived on an edge from which they still haven’t entirely stepped back. Inter’s foothold is even less secure. They too needed a last-minute equaliser from Lukaku to avoid an opening night defeat against Gladbach, but haven’t won since these teams met a fortnight ago. Zinedine Zidane called it “a final”, but this time it really could be.

Taken to pieces by Shakhtar in the first game, calamitous defensively and 3-0 down at half-time, Madrid scored twice in the second half but had a Federico Valverde equaliser ruled out in the 92nd minute. They then scored twice to come from two down in the second match in Germany, Sergio Ramos and Casemiro scoring in the 87th and 94th minutes. And in the third, substitute Rodrygo scored an 80th-minute winner, just as they were going under: Inter had pulled back to 2-2 from 2-0 down and were rolling over Madrid. Asked afterwards if he was happy or relieved, Rodrygo replied: “Both.”

“We bet it all on one card, and it came off,” Ramos said, but there are more hands to play. Madrid were third but it could have been worse; they could have been Inter. Conte, though, insisted that the way his side had played should give them “morale” for the next meeting: “This should convince us,” he said.

So might Madrid’s problems; this is not a team that can’t be beaten, as Inter saw, despite losing out at the last and this time they will have Lukaku available. For Madrid, that goals against column is startling: seven in three Group B games. The solidity that took them to the league title last season has gone: they have conceded in each of their last eight games and are not scoring as they were either.

Madrid also take on Inter without captain Ramos and in his absence they have lost six of their last seven Champions League games, only defeating Club Brugge. Éder Militão, who has been isolated after testing positive for Covid, and Karim Benzema, who has been training alone, have not travelled to Milan but Casemiro is in the squad after having Covid. Everyone is still waiting for Eden Hazard, recently returned from injury and seen only in flashes. Zidane is under pressure, having won two of Madrid’s last five games in all competitions.

Before the international break, Madrid conceded four at Valencia and if that was a bit of a freak result – there were three penalties and an own goal – they have not convinced, the vulnerability striking. When newly promoted Cádiz beat them, they were fortunate it was only 1-0. “If they had got two or three more, we couldn’t haven’t said anything,” Zidane admitted. “They were better than us in every way and beat us in everything,” Thibaut Courtois said.

It continues. This weekend, while Lukaku and Lautaro Martínez were scoring in the 84th and 90th minutes to complete Inter’s comeback against Torino, Villarreal midfielder Manu Trigueros felt his side should have defeated Madrid after they failed to get a winning goal during a final half an hour in which they dominated only to draw 1-1. “We let them out alive,” he said. It is the story of Madrid’s season, especially in Europe, and tomorrow they get another life. Lose in Milan, though, and this time there may be no way back – for either team.