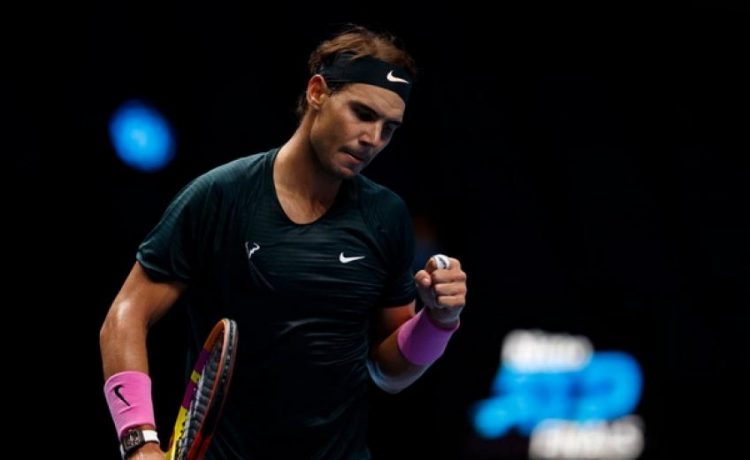 Rafael Nadal will face Daniil Medvedev in the semi-finals after battling to a three-set victory over defending champion Stefanos Tsitsipas.

It was a winner-takes-all clash after both men lost to Dominic Thiem, but Nadal was upbeat about his level following his narrow defeat to the Austrian on Tuesday and showed here that optimism was justified with a 6-4 4-6 6-2 victory.

Nadal served superbly up until an untimely double fault saw Tsitsipas pinch the second set, but the Spaniard, who has never won this title, responded well to reach the knockout stages for the sixth time.

Earlier Russian youngster Andrey Rublev signed off from his maiden ATP Finals in style by beating Dominic Thiem 6-2 7-5. The aggressive 23-year-old took full advantage of a rather flat performance by Thiem who had already sealed his place in the semi-finals with two wins in the London Group.

Defeats by Rafa Nadal and Stefanos Tsitsipas meant Rublev could not advance but the £115,000 and 200 ranking points for a group stage proved a sizeable carrot. But for a double fault when he had a match point against Tsitsipas on Tuesday, Rublev could now be looking at a place in the semi-finals. Instead he will leave London full of belief after a superb 2020 in which he won a season-leading five titles.

“I was so close in my second match. I had match point and I was serving, so it could have been a completely different story if I won two matches,” Rublev said on court. “I would maybe still have a chance to be in the semi-finals. But it’s part of life.”

US Open champion Thiem, runner-up to Tsitsipas in last year’s final here in London, now has a day off to shrug off the defeat and prepare for Saturday’s semi-final when he will face either world number one Novak Djokovic or Alexander Zverev.

“It was difficult to keep the intensity like I had in the first two matches,” Thiem, who produced a masterful display to beat Nadal on Tuesday, told reporters.

“When I’m not at 110% at this tournament there is no chance against any player, that’s what happened today.”