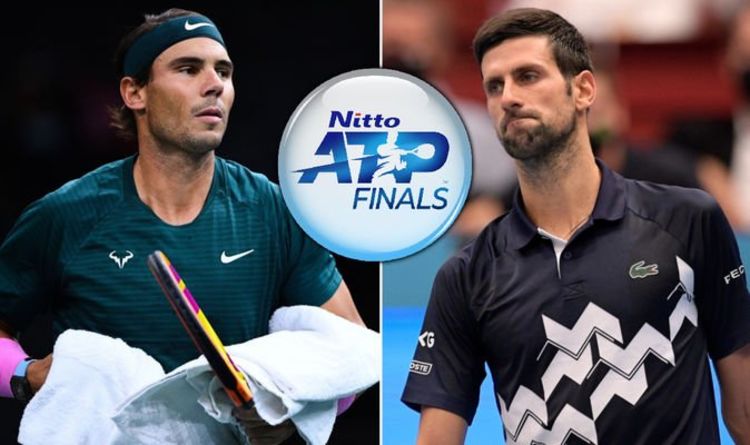 Stan Smith has warned Rafael Nadal and Novak Djokovic that they will face a battle to get out of their ATP Finals groups after the draw to decide the two four-man groups was made on Thursday. World No 1 Djokovic and second-ranked Nadal are on opposite sides.

Djokovic is in Group Tokyo 1970 and will face Daniil Medvedev, Alexander Zverev and Diego Schwartzman in London next week.

While Nadal is in Group London 2020 and will take on Dominic Thiem, Stefanos Tsitsipas and Andrey Rublev.

The two members of the ‘Big Three’ are among the favourites to win the tournament on paper although Nadal has never been triumphant at the year-end tournament.

Djokovic is a five-time champion at the Finals but has not come out on top at The O2 since 2015.

And British tennis legend and two-time Grand Slam champion Smith – who won the 1970s ATP Finals – has warned the two top seeds that they face a tricky test.

“If you look at this draw, you look at Medvedev and Zverev, who just played in the finals against each other in Paris last week, they obviously are playing quite well.

“They’re going to be pushing Novak in that group. Diego Schwartzman will be the weaker link of those four.

“But on the other side, Rublev has really been hot overall for the year, it’s unbelievable.

“Tsitsipas is the defending champion and Thiem is the US Open champion, so Rafa’s got his hands full with those three guys.

“So it really depends on how they come out, how they feel physically.

“I know Tsitsipas may have a little bit of a leg issue, Thiem may have some blisters, he had them in Vienna.

“We don’t know exactly how those are and how the guys are feeling physically as they go out to play.”

This is the tournament’s 12th and final year in London before heading to Turin, Italy for 2021.

It will get underway on Monday and each player will play three round-robin matches against their group opponents before the two with the best records from each group progress to the semi-finals.

Discussing Nadal and Djokovic’s chances of victory, former British No 1 Tim Henman said to The Metro: “It’s not really going out on a limb is it to choose Djokovic.

“He’s the No. 1 player in the world again and he’s won this tournament on I think five different occasions.

“He’s got such a good record indoors and for all these players it’s almost the last push as it were. I think if I had to be backing anyone it’d be Djokovic.

“I think sometimes fatigue can come into it. They do normally have very long seasons with a lot of matches. That is, obviously, not the case this year.

“It’s a tournament he’ll [Djokovic will] desperately want to win and I do think he starts as the favourite.

“Having said that, in Vienna, he did look a bit flat when he lost [to lucky loser Lorenzo Sonego in straight sets] so I’m sure he’ll want to bounce back and finish strongly at the O2.”

On Nadal he added: “When you set the bar so high, when you look at his record indoors and sort of say, ‘Oh, it’s not too good.’

“But he’s won a Masters series indoors, he’s been in the final of the ATP Finals on two occasions I think. He’s still got a very good chance.

“I don’t think he’s the favourite this coming tournament but he’ll still fancy his chances if he’s fit and healthy.”