Home » Premier League: 10 things to look out for this weekend
Soccer

Premier League: 10 things to look out for this weekend 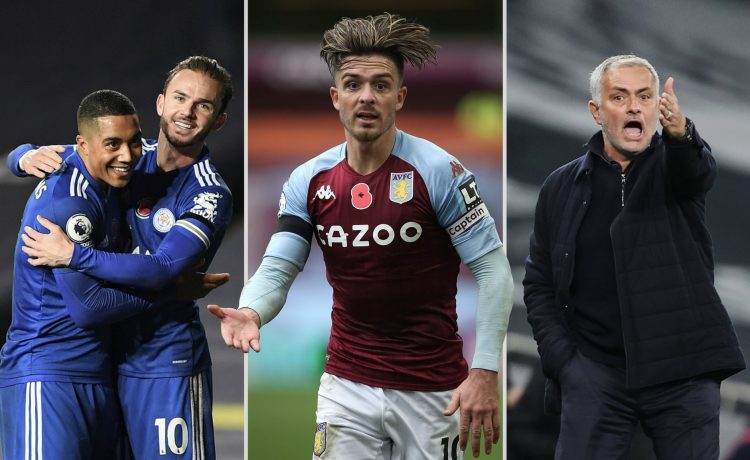 Both sides have personnel problems and coming in the immediate aftermath of an international break, Tottenham’s home match against Manchester Cityseems nigh on impossible to predict, even before factoring in some of the borderline-bonkers scorelines featuring both teams in other matches this season. A win for Tottenham on Saturday evening would make them overnight leaders of the Premier League and leave City looking uncharacteristically forlorn and out of sorts in mid-table. With Gareth Bale gaining sharpness with every passing day and likely to start in attack for the home side along with the irrepressible Son Heung-min and Harry Kane, it is difficult to escape the conclusion that City will have their work cut out in what seems a genuine test of both sides’ title credentials. José Mourinho is known for his extreme pragmatism, but it is difficult to see his side approach this contest in anything other than a comparatively gung-ho manner with so much attacking talent at their disposal.

It would be a stretch to say Sunday’s meeting of the champions and the league leaders is perfectly timed for Leicester but it is true that injury-riddled Liverpool are as vulnerable now as they are likely to be this season. Brendan Rodgers’s team have plenty of absentees themselves but they have coped well and the international break was relatively kind to them, with James Maddison and Harvey Barnes (and Jamie Vardy) not on England duty. Youri Tielemans, meanwhile, played brilliantly for Belgium, as he has done all season for Leicester. He has become indispensable for Rodgers, the one midfielder for whom Leicester have no obvious back-up. Inconsistent last season, Tielemans has played every Premier League and European game for Leicester this term, offering the creativity from deep that no one else can provide Leicester – and which Liverpool may lack if Thiago Alcântara is still not fit.

3) Bielsa can offer a lesson in style to Arsenal

One thing is clear about Leeds and Arsenal: they are two of the most clearly-drilled teams in the Premier League. That is where the similarity ends, for now. When Marcelo Bielsa took over a rag-tag bunch at Elland Road he instantly transformed them from Championship also-rans into freewheeling promotion contenders and their gung-ho style continues, with fluctuating results, to thrill in the top flight. After meeting a disparate bunch when he accepted the Arsenal job last December, Mikel Arteta succeeded in creating a structure that would eradicate many of their defensive problems but the cost to their attacking performance is increasingly evident. So which approach will hold the most merit when the pair meet on Sunday? Arteta is more of a Bielsista than the pragmatist of recent months would suggest but will probably fancy his chances of patiently exposing opponents who have conceded eight in their last two games. At their best, though, Bielsa and Leeds could offer a vision of how far Arsenal must travel to become truly exciting again.

Now that Jack Grealish has finally been given the chance to prove how good he is on the international stage, and Tyrone Mings is doing likewise, Aston Villa can look forward to other players asserting their England credentials. Ross Barkley’s chances of getting back into Gareth Southgate’s good books can only be boosted if he continues to collude with Grealish as wonderfully as he did in the victory at Arsenal two weeks ago, and Ezri Konsa’s central-defensive partnership with Mings is another double act that Southgate should bear in mind. Ollie Watkins also deserves to be under consideration in view of his performances since arriving in the Premier League, all of which means that if Villa continue their impressive form, starting against Brighton on Saturday, then there could be a case for making them the most heavily represented club in England’s European championship squad.

After four consecutive matches played behind the ill-advised, prohibitively priced and recently scrapped Premier League PPV curtain, West Brom finally get to strut what passes for their stuff before the UK masses – or at least that tiny percentage of the masses with a BT Sport subscription – when their Saturday night match at Manchester United is televised. Without a win at home in the league this season, Ole Gunnar Solskjær’s side have got to fancy their chances of beating a struggling side with only three draws to their name, while the Baggies are more likely to view this as a free hit; the kind of game from which no one expects them to take anything. If he is passed fit after spending time in self-isolation following a positive covid test, the sight of the 36-year-old Branislav Ivanovic in the visitors’ defence may come as a shock to all those who have been starved of exposure to West Brom and let the former Chelsea defender’s mid-September move to the Hawthorns bypass them completely.

While the sound of managers moaning about their teams having to play football matches can be tedious, Frank Lampard seemed justified in complaining about members of his Chelsea squad having to assemble to travel to Newcastle for a lunchtime kick-off on Saturday the day after they’d flew in from various global locations in dribs and drabs. While there will be no travelling fans to inconvenience with its needlessly inconsiderate scheduling, BT Sport and its studio representatives are unlikely to acknowledge their own role if the game turns out to be a drab affair featuring understandably exhausted players. Lampard’s grievance is understandable but the problem of broadcasters playing fast and loose with the fixture schedule is one he and his fellow managers ought to urge their employers to raise before they sell the rights to their product for billions of TV pounds.

7) Lookman’s chance to give Everton cause for regret

Ademola Lookman left Scott Parker “disappointed and angry” at the fluffed “Panenka” penalty that denied Fulham a point at West Ham before the international break, but where better to clear his head than against the club that let him go after only 14 starts? Plenty was expected of Lookman when he joined Everton from Charlton in 2017 but despite a flying start, it never quite happened for the forward and a £22.5m move to RB Leipzig eventually seemed a reasonable outcome for all parties. Now Lookman finds himself in a relegation battle, loaned to Fulham after struggling to plug into Julian Nagelsmann’s exacting demands in Saxony. There is no doubting his ability and, that botched spot-kick apart, he has given a pallid attack some life in those early appearances. If he comes back to haunt Everton, whose lack of attacking depth without Richarlison showed in three straight defeats that derailed their flying start, then perhaps the Toffees might regret not showing a little more faith.

Daniel Podence and Pedro Neto are excellent players but Southampton will probably hope both start at Molineux on Monday, since that will mean Adama Traoré beginning on the bench for a sixth league match in a row. Traoré tore Southampton apart at St Mary’s in January, inspiring a comeback from 2-0 down to lead his side to a 3-2 victory, but he has not started a league match since September amid a stalemate in talks over a new contract. Although his current deal does not expire until 2023, Wolves would like him to commit to a new one. So far no agreement has been reached and the devastating attacker has only been used in bursts. Wolves’ other options are good, but they will not be back to their best until Traoré is back in form and favour.

9) Blades look to rediscover the art of recovery

Last season Sheffield United fell behind in 22 Premier League matches but came back to earn points from nearly half of those games. They have been unable to match that recovery rate this season, which is why they find themselves bottom of the league, with confidence low. After facing Chelsea, Manchester City and Liverpool in their past three outings, this weekend’s meeting with West Ham is a relatively benign fixture. Chris Wilder knows his team need points to kickstart a climb back up the table. After the defeat to Chelsea in their last match, Wilder said United’s season could be determined by what happens between now and the end of December. “We have to get a decent points tally going into the new year because if we do, that will raise belief and confidence.”

10) Burnley need goals to back up claims of improvement

Burnley are improving. Sean Dyche certainly thinks so and, if we are being generous, three of their past four performances offer room to make the argument. The problem is that they did not score in any of those games (home defeats to Spurs and Chelsea; away draws with West Brom and Brighton) and the search for a cutting edge could hardly be more urgent. Nor could the quest for a win, given they are entrenched within a bottom five that increasingly look at risk of fighting out their own mini-league for survival. Only one of their three goals so far has come from a forward – last season’s top scorer, Chris Wood – and their front-line is feeding on worryingly thin gruel. “We know we’ve got to continue to search for better quality chances,” Dyche said after a draw at Brighton that at least kept them in touch with a fellow struggler. Crystal Palace should be far from impenetrable on Monday night but, given the Eagles’ strength on the counter, Burnley cannot afford another 90 minutes of huff and puff.