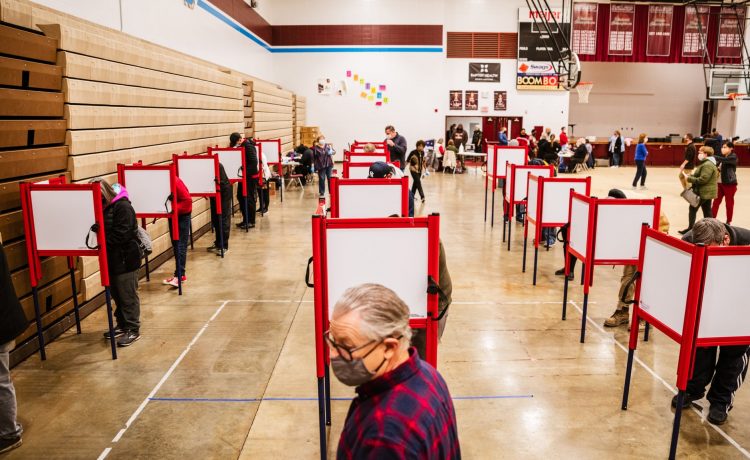 The presidential election was the “most secure in American history” with no evidence that votes were compromised or altered, a coalition of federal and state officials has said, offering the clearest repudiation yet of Donald Trump’s false claims of fraud.

The statement backed repeated assurances by experts and state officials that, despite the coronavirus pandemic and record numbers of voters, the election went smoothly without irregularities.

Yet almost a week after Democrat Joe Biden was declared the winner, Trump continues to refuse to accept defeat and to hamper an orderly transition of power. In a newspaper interview on Friday, he insisted without evidence that the election was stolen from him and that his quixotic legal challenges will succeed.

The latest blow to his case from the Cybersecurity and Infrastructure Security Agency, which led federal election protection efforts. “While we know there are many unfounded claims and opportunities for misinformation about the process of our elections, we can assure you we have the utmost confidence in the security and integrity of our elections, and you should too,” it said.

“When you have questions, turn to elections officials as trusted voices as they administer elections.”

The statement was tweeted by Chris Krebs, the agency’s director, who just hours earlier had been the subject of a media report that said he had told associates he expects to be fired by Trump.

Krebs has been vocal on Twitter in repeatedly reassuring Americans that the election was secure and that their votes would be counted. “America, we have confidence in the security of your vote, you should, too,” he wrote.

The officials who signed the statement said they had no evidence that any voting system had deleted or lost votes, had changed votes, or was in any way compromised.

They said all the states with close results have paper records, which allows for the recounting of each ballot, if necessary, and for “the identification and correction of any mistakes or errors”.

“The election was the most secure in American history. Right now, across the country, election officials are reviewing and double checking the entire election process prior to finalising the result,” the statement added.

The message delivers a fresh blow to the credibility of Trump’s unsubstantiated claims of fraud and widespread problems that he insists could yet tip the election in his favour.

His campaign have seized on issues that are typical in every election: problems with signatures, secrecy envelopes and postmarks on mail-in ballots, as well as the potential for a small number of ballots miscast or lost. With Biden leading Trump by wide margins in battleground states, none of these would have any impact on the outcome.

Trump’s campaign has also launched legal challenges complaining that their poll watchers were unable to scrutinise the voting process. Many of those challenges have been thrown out by judges, some within hours of being filed. Again, none of the complaints showed any evidence that the outcome of the election was affected.

In a further sign that Trump’s “legal strategy” is unravelling, the law firm Porter Wright Morris & Arthur withdrew from a case in Pennsylvania that challenged nearly 2.65m votes that were cast by mail, the majority by Democrats. It said in a memo: “Plaintiffs and Porter Wright have reached a mutual agreement that plaintiffs will be best served if Porter Wright withdraws,” but did not offer further explanation.

Yet even as he suffers loss after loss in court, the president remains defiant and in denial. He gave the Washington Examiner newspaper a state-by-state breakdown of how he thinks Biden’s victory can be overturned.

The Examiner reported: “At one point in the conversation, the president seemed to consider and then quickly reject the idea of losing. ‘I’m a guy who realizes – five days ago, I thought, “Maybe,”’ he said, pausing for just a second. ‘But, now I see evidence, and we have hundreds of affidavits,’ referring to the testimonials included in his lawsuits.”

The president continued to push the baseless allegations on Friday. He tweeted: “For years the Dems have been preaching how unsafe and rigged our elections have been. Now they are saying what a wonderful job the Trump Administration did in making 2020 the most secure election ever. Actually this is true, except for what the Democrats did. Rigged Election!”

The Trump administration’s unwillingness to comply with a presidential transition has raised national security concerns. Some Republicans have called for Biden to have access to classified intelligence briefings, but the majority of Republican officials still refuse to publicly accept the former vice president’s victory.

Kevin McCarthy, the Republican minority leader in the House of Representatives, argued on Thursday that Biden does not need intelligence briefings because Trump might remain president in the new year . “He’s not president right now, don’t know if he will be January 20, but whoever is will get the information,” he told reporters.

The resistance is complicating Biden’s effort to lead a smooth transition to the January inauguration, keeping him from the funding and agency resources typically afforded to an incoming administration. Former president Barack Obama, promoting a new memoir, has told CBS News’s “60 Minutes” next programme that he is troubled by the false claims of widespread election fraud.

“They appear to be motivated – in part because – the president doesn’t like to lose and never admits loss,” Obama said. “I’m more troubled by the fact that other Republican officials who clearly know better are going along with this, are humoring him in this fashion. It is one more step in delegitimizing not just the incoming Biden administration, but democracy generally. And that’s a dangerous path.”

New Hampshire Governor Chris Sununu, who endorsed Trump’s re-election, told reporters: “Joe Biden is the president-elect, and I think like most Americans, we suspect he’ll be taking the oath of office in January.”

Trump has kept a lower profile over the past week than at any time during his presidency. He was seen on Veterans Day, attending a service at Arlington National Cemetery, but has not spoken publicly apart from the Washington Examiner interview and dozens of tweets and retweets.

Critics accuse him of “going awol” at a critical moment during the coronavirus pandemic with cases surging to all-time highs. The US reported 153,496 Covid-19 cases on Thursday, according to Johns Hopkins University – the first time the number of coronavirus infections have exceeded 150,000 in a single day.

Biden, meanwhile, continues to receive congratulatory calls from around the world. A lifelong Roman Catholic, he spoke to Pope Francis on Thursday. His transition team said in a statement that the president-elect thanked Francis for “extending blessings and congratulations and noted his appreciation”.