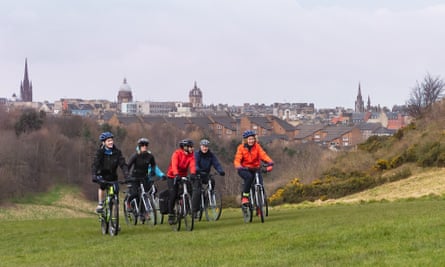 A new website aims to help climate conscious travellers make more-informed holiday choices by calculating the carbon costs of British breaks and even day trips in response to the increase in domestic tourism during the pandemic.

Natural Britain, which launched in July, wants to become the go-to website for ethically-run travel in the UK, and claims to be the first company in the country to offer carbon labelling – a calculation of the carbon dioxide emitted – for every part of the trip.

Natural Britain hopes to appeal to the growing number of outdoor enthusiasts, many of whom have taken on new challenges or found a fresh appreciation for nature in 2020. Itineraries include a cycle tour of the Cotswolds, sky-running in Snowdonia and sea-kayaking in Scotland, and activity sessions and accommodation can also be booked separately. It hopes to feature 35 experiences by the end of the year, increasing to about 100 in 2021.

Although most are green, low-carbon trips, especially compared with foreign travel, founder Mark Wright said he wanted to make consumers more aware of the amount of carbon different aspects of a holiday generate, and hoped such labelling would become commonplace across the travel industry.

“If we all start to calculate our emissions, and everybody in the country aims for a personal footprint of 10 tons of carbon a year, there’s a much better chance of us making a meaningful reduction as a country, and as a world population,” he said.

On one of the company’s trips, on average accommodation accounts for 40% of emissions, transport 33%, food 25% and activities 1%. A five-day multi-activity break in Wales, for example, including packrafting, “riverbugging” (riding river rapids with an inflatable) and wild camping is labelled as generating 53kg of carbon dioxide per person, excluding food and reaching the destination. Advice on how to offset through a rewilding or reforestation scheme will be offered when bookings are made.

Aviation is usually responsible for 40% of global tourism’s carbon emissions, contributing 7% of the UK’s total emissions, according to the World Tourism Organization.

Yet, while the International Air Transport Association forecast air traffic would be down 66% in 2020 compared with 2019, and said it would go down as “the worst year in the history of aviation”, the UN’s World Meteorological Organization announced on Monday that climate-heating gases have still reached record levels. The reductionn of emissions of between 4.2% and 7.5% due to the pandemic was described as a “tiny blip” in the build up of greenhouse gases.

This doesn’t mean we should lose hope, says Wright, it just “stresses the urgency that we have to make changes for the long term”.

Carbon isn’t Natural Britain’s only concern. Experiences must also benefit local communities, something Wright says the domestic tourism market has been slow to recognise as worthwhile. They must have strong sustainability policies regarding sourcing locally and single-use plastic, and be able to back them up.

“But we can’t be too rigid,” he says. “As long as people are doing the right thing and trying, we can offer guidance. Part of our ambition is to create a community of suppliers who can share best practice and develop ideas as a central resource.”

GreenTraveller, another website specialising in low-carbon sustainable holidays across Europe that launched in 2009, saw a huge increase in interest in nature at the local level this year, and in holidays in rural areas, especially glamping, and in “wilderness” and lesser-known Areas of Outstanding Natural Beauty, such as Arnside, Silverdale, and the Llŷn peninsula.

Its founder Richard Hammond noted that sustainable tourism was booming before Covid. GreenTraveller saw a 200% increase in web traffic in the latter half of 2019 and into February.

“It’s a good time to capitalise on the sustained interest in travelling closer to home,” Hammond said.

Natural Britain isn’t the only company to spot the opportunity. Byway, a new tour operator organising tailor-made slow-travel and flight-free trips in the UK and Europe launched last week, while others introduced UK trips for the first time, including 50-year-old Kuoni, adventure company Intrepid, and Wild Frontiers, which in August added the Orkney Islands to its usual programme of adventures in far-flung destinations, such as Sudan, Antarctica and Mongolia.

Although inbound tourism to the UK was massively down this year – Visit Britain estimated it would see a decline of 66% from a predicted 31.1m visits to just 10.6m – the rise in domestic travel has led to a bumper year for some aspects of the industry, with glamping the big success story.

Glamping specialist Canopy and Stars said it had the biggest year for bookings in its 10-year history, with forward bookings up 200% for 2021 already, suggesting the trend is set to continue – 98% of this year’s guests said they planned to take a UK holiday in 2021.

Even at the top end of the market, new UK ventures were getting in on the trend. Luxury tour operator Pelorus partnered in June with Camp Kerala, which usually creates festival glamping fields, to offer luxury personalised camps for private groups. Wildnis, whose staff have backgrounds arranging hardcore adventures in the Arctic and Sahara, launched luxury 4×4 expeditions in Scotland, from £3,500pp for four nights. It too provides offsetting.

Sales of wetsuits, camping gear, kayaks and paddleboards rose as people took on new outdoor challenges and sought to find solace in nature. The nation upped its adventure game it seems, and will continue to seek new domestic experience in the great outdoors.

As Alastair Humphreys, an adventure writer who promotes “microadventures” said, those who tried their first UK outdoor experience under the pandemic are likely to have got a taste for it: “The small, first adventure gives people confidence, surprises them how easy but rewarding it is, and makes them realise what great undiscovered things are on their doorstep.”