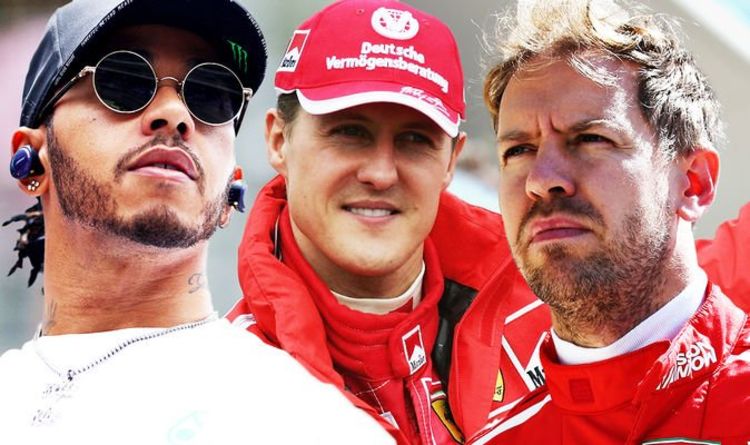 Lewis Hamilton has equalled Michael Schumacher in becoming a seven-time Formula One world champion but Sebastian Vettel insists the former Ferrari man is the greatest of all-time. The German has been one of Hamilton’s main rivals throughout his career in the sport.

Vettel believes Schumacher could unlock an extra level of talent compared to Hamilton.

The Mercedes star has dominated the 2020 F1 season and wrapped up his seventh world title last time out in Turkey with three races to spare.

Hamilton is now set to be knighted for his incredible achievements in the sport in the New Year honours.

But Vettel is still convinced the Brit is not on the same level of Schumacher.

He told MotorSport: “I still say that Michael is the best of all-time for me.

“When it came down to it, he unlocked a kind of extra level. I have never felt this fascination, this talent in anyone else.”

Vettel has seemed to indicate Schumacher worked harder than Hamilton to maximise his talent inside the car.

He added: “I think he was better than anybody else I’ve ever seen so far. I think he had a natural talent that is very difficult to explain.

“I think if you saw him go karting, obviously I didn’t see him at a young age but I did at an older age, and I was happy to join him in the Race of Champions a couple of times.

“So you see a little bit more of the skills and the car control.

“On top of that, he had an incredible work ethic, but I think it’s the combination of the two that for me stands out. I haven’t seen a match yet.”

Meanwhile, Red Bull advisor Helmut Marko has opened up on the talents of Hamilton.

“There is no doubt that Lewis Hamilton drives exceptionally,” Marko explained to AutoBild.

“But,” he continued, “it could be that in the hybrid era Hamilton’s Mercedes were far more superior cars than our Red Bulls from 2010 to 2013 in terms of engine performance alone

“And also the placements in the World Championship of both drivers.

“From 2014 to 2016 two Mercedes always took the first two places in the World Championship, again in 2019 and probably this year as well.

“And Sebastian Vettel managed to be runner-up World Champion twice with Ferrari in 2017 and 2018. He could beat Valtteri Bottas on a Mercedes.

“That also speaks to his class.”

Hamilton will look for yet another win this weekend when F1 returns with the first of a double-header in Bahrain.

Mercedes have already wrapped up the constructors’ championship as well as Hamilton winning the drivers’ title.