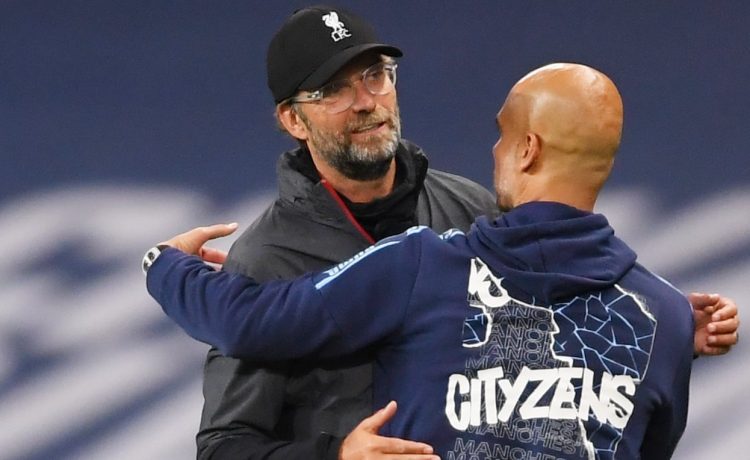 Jürgen Klopp has said Liverpool face the “most difficult game in the world of football” at Manchester City on Sunday despite their title rivals’ inconsistent start and the intense demands of a truncated season.

The Premier League champions can move eight points clear of Pep Guardiola’s team with victory at the Etihad Stadium, albeit having played one game more, after responding to the loss of Virgil van Dijk with five straight wins in all competitions.

City have yet to record back-to-back wins in the Premier League this season but Klopp, while dismissive of the suggestion Sunday’s game could have an impact on the title race, insists their threat and quality is undiminished.

“It is important that we have our own plan and not only think about their plan, that we are brave, we play football with all we have and then we have a chance,” said the Liverpool manager. “But it is very difficult. This is the most difficult game in the world of football I would say, to play against Manchester City.

“It is a very difficult game hopefully for both teams because both teams will perform on a high level. There are so many things that are different this season, nothing is to compare with last Nothing can compare with the year before. year. Everything is different and we just have to make sure we get through very intense periods, line up the fittest players, and play the best football we can.”

The rivalry between Liverpool and City has dominated the Premier League over the past two seasons and served up several memorable, high-calibre contests. Klopp believes his team must reproduce the clinical form that destroyed Atalanta 5-0 on Tuesday in the Champions League to record a first Premier League win at the Etihad since November 2015.

He added: “In England, with all the quality of the other teams and all the challenges in the game – what you have to be aware of and think about and what you have to do – it is City [who are most difficult to play] because they have a good plan, a clear plan and in each position a player who has the physicality and the technique to make a difference.

“They play a specific way, they are pretty dominant, but if they have to counterattack they are pretty strong so they have speed and creativity. They are in really good shape. If you don’t use all your chances that can cause you a problem results-wise. We just have to make sure it doesn’t happen on Sunday and they will not have that many (chances).”

Klopp, meanwhile, has congratulated Mamadou Sakho on winning his libel action against the World Anti-Doping Agency after it repeated false claims that the former Liverpool defender had taken a banned substance in March 2016. Sakho missed the 2016 Europa League final after receiving a provisional ban from Uefa, later overturned on appeal, and never played for Liverpool again.

The Liverpool manager commented: “We all knew for a long time already that Mama did nothing wrong. It was a massive, massive blow. Not only couldn’t he play the Europa League final but he couldn’t play in the Euros as well. I’m really happy for Mama that he at least now got the evidence that he did nothing wrong and it’s a very important thing.

“Doping is a problem yes, but I never really saw it as a problem in football because I’m 30 years in it and never was in contact with any kind of it. And if [there is], it’s because somebody made a silly decision not because they wanted to improve his recovery time or whatever. If you carry around the mark that you did doping, especially when you didn’t do it, that’s massive. So I’m really happy he’s freed of all of these things.”