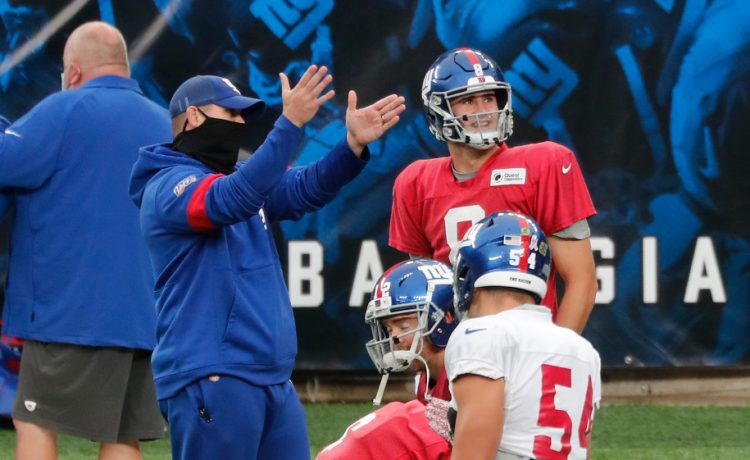 Once upon a time there was a New York Giants team that went 3-12-1 with a rookie head coach.

And that team had an injury-prone young quarterback who drew the ire of Giants fans because, after being the seventh pick of the 1979 NFL Draft, he was 14-20 when the 1983 season ended.

For Giants fans who have been wrapped for what seems like an eternity inside a cocoon of misery, who have had too many hopes and dreams crushed year after year after year, through coach after coach after coach, those Bill Parcells-Phil Simms Giants should serve as a reminder that the sweet, innocent climb to the top of the football mountain can happen.

It sure helped having Lawrence Taylor, but those Giants didn’t begin ascending until Parcells changed his ways and became the coach of the entire team instead of mostly his guys on defense, and Simms broke through as the battlefield commander.

Daniel Jones has stopped being careless with the football and is offering hope once again that he will prove to be the right quarterback for the post-Eli Manning Era.

I feel more strongly about his future than I did about that of Parcells before he became Parcells.

But Judge is the leader/CEO this franchise has desperately wanted and needed in the post-Tom Coughlin Era. He has not flinched through the pandemic storm, the social justice movement, the loss of Saquon Barkley, on and on.

He has been steadfast from Day 1 that there will a zero-tolerance policy for anyone or anything that deters from winning, and his shocking firing of offensive line coach Marc Colombo — a Parcells Guy, ironically — was the latest example. The same rules that applied for Golden Tate and for Andrew Thomas applied for Colombo.

Judge has effortlessly walked the tightrope between being a quote-unquote players’ coach and a no-nonsense, no-excuses coach demanding one for all and all for one, very much like Coughlin’s “The Team, The Team, The Team.”

He motivates by building relationships and finding what makes each player tick. No one did that better than Parcells.

Judge’s players knew he cared about them long before Logan Ryan let it be known that Judge would have allowed him to be with his wife, Ashley, in Florida when she was instructed to head to the hospital for what could have been a life-threatening ectopic pregnancy.

Parcells didn’t have the benefit of learning at the feet of an established Belichick or Nick Saban.

“He consulted a lot during those days with Al Davis,” George Martin told The Post. “I think that the wisdom that he got from Al Davis as he was ascending up the ranks was invaluable.”

It didn’t take Judge long to get universal buy-in from the players. Parcells, who had been promoted from defensive coordinator when Ray Perkins left for Alabama, inherited a different set of problems.

“There was always skepticism on the offense initially,” Martin said. “Bill was our guy, and they thought that he was gonna show favoritism toward the defense. But we were pissed because we’d go out and we have a great defensive stand, offense go out, three and out. Well hell, got tired of that. We were playing maybe 70 percent more of an NFL game than the offense was. There was a very, very huge division between the offense and defense. And Parcells came in, and he acknowledged that, and then he eradicated it. He made sure that we were no longer offense versus defense, but we were the New York Football Giants.”

“To say I’m disappointed is the understatement of the world,’’ Simms said at the time. And also: “I guess I’ll just be an overpaid backup.”

Brunner was traded to the Broncos in spring of 1984. Carl Banks was the third pick of the 1984 NFL Draft. Parcells had nearly been replaced by general manager George Young with Howard Schnellenberger.

“The seminal moment for me that stood out was the post-practice address by the coach during training camp, when he pulled us all together on the practice field and said basically he’s gonna do things his way and he’s gonna make some decisions that are not gonna be popular and there are gonna be some players that are gonna get cut that a lot of you like,” Banks recalled. “But he said that, ‘I’m gonna give you everything I got, and I need you to be my guys.’

“He said, ‘Look, they’re gonna fire my ass if I don’t get this thing turned around,’ that’s how he started the speech.”

And then the Phil Simms Era began in earnest.

“When Phil began to mature and when he became the heir apparent, that’s when we all began to rally around him,” Martin said.

The crescendo came on Jan. 25, 1987, in Pasadena, Calif., where Simms went 22-of-25 and beat John Elway and the Broncos in Super Bowl XXI. Martin recalls Parcells calling a meeting two days before the game.

“And he had us check out of our scheduled hotel, and he moved us to an undisclosed location before the game,” Martin said. “At first we were upset. But it was sheer genius, and he had gotten that from Al Davis, because he didn’t want us to be subjected to all the distraction of family. He had told us very early on, ‘Get your tickets taken care of and all the requests, because at a certain point in time, there will be no outside communication.’ This was before cellphone. I thought it was a stroke of genius.”

There will never be another Lawrence Taylor, but Tom Coughlin and Eli Manning won their first Super Bowl in their fourth year together and then won a second.

You can win a Super Bowl if you have the right head coach and the right quarterback.

“I think that neither individual are giving in to the whims of Twitter rants of people that don’t like what they’re doing, and I think they see it for what it is and they’re working towards one goal, and that’s to get better,” Banks said. “The quarterback wants to get better, the coach needs him to get better, and it’s a great partnership so far.”

So for all those Giants fans who want so badly to drink from the half-full glass, for whatever it’s worth at this 3-7 moment, Joe Judge and Daniel Jones are ahead of where Parcells and Simms were in 1983.