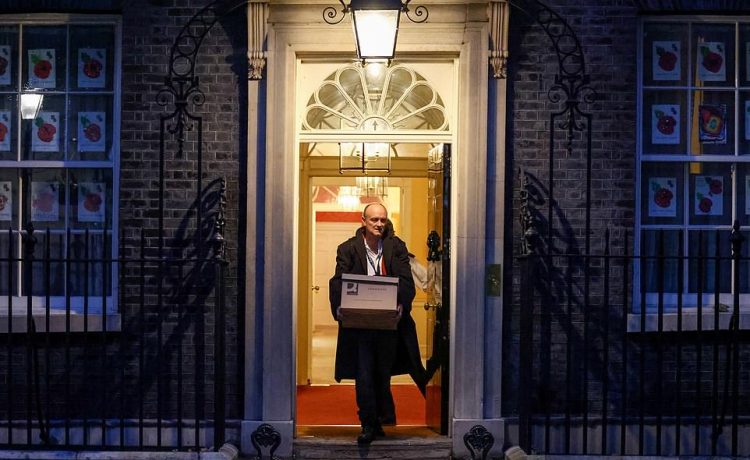 The Prime Minister’s special adviser was left infuriated when his close ally Lee Cain was forced out of his position by Boris Johnson earlier this week. Mr Cummings was pictured leaving Downing Street tonight with his personal items in a box.

A senior No10 official has commented on the image, and told the Financial Times: “That’s the last time he walks down the road like Kim Kardashian, preening for the cameras like the spoilt lord of Barnard Castle.

“In future advisers will go round the back and let the elected prime minister use the front door.”

This morning the former aide said he would stay in post until the end of the year, but in a quick turn of events he has decided to quit with immediate effect.

Mr Cummings spoke with the Prime Minister on Friday, with the pair deciding it was best for the aide to leave tonight.

The BBC’s political editor Laura Kuenssberg reports that his departure had been brought forward given the “upset in the team” in Downing Street, for which she said it had been a “difficult week”.

She said there had been long-running tensions between different factions in No 10 but this “slow burning fuse exploded fast when it finally happened”.

It comes as a behind the scenes power struggle has been occurring at No10 over the past few days.

A dispute erupted over how Downing Street is run and the appointment of a new chief of staff to Mr Johnson.

Earlier in the week Mr Cain was tipped for the role but the Prime Minister came under pressure to reverse the appointment.

This led to Mr Cain’s resignation from No10.

Mr Cummings worked alongside Mr Cain as part of the Vote Leave campaign during the 2016 EU referendum.

Since Mr Johnson entered Downing Street, the two advisors have been viewed as leading Brexiteer voices within No10.

She is said to have been opposed by Mr Cain.

Both Mr Cummings and Mr Cain will continue to work for Mr Johnson until mid-December, No10 has confirmed.

The Government’s official spokesman also said: “The Prime Minister has today asked Sir Edward Lister to take on the role of chief of staff for an interim period pending a permanent appointment to the post.”

Mr Cummings’ resignation from Downing Street has been welcomed by a swathe of Tory MPs, who have long been sceptical of the aide’s influence over the Prime Minister.

Backbencher Sir Roger Gale told Sky News on Friday Mr Cummings had “become a distraction” and a “malign influence at the centre of Downing Street for too long”.

He said: “It’s right that he should go. The sooner he leaves the better.”

Former cabinet minister Theresa Villiers, said: “Clearly there are concerns about the dismissive attitude sometimes shown by Lee Cain and Dominic Cummings towards people in Government and MPs on the backbenches.

“This is an opportunity to move on from that and to have a more collaborative approach.”

Former Lib Dem leader Tim Farron commented on the matter earlier today and said: “Cummings may have gone, but let’s never forget that the worst part of the whole Barnard Castle affair was the way Conservative ministers shamelessly lined up to defend him saying ‘it’s what any loving father would have done’ while millions made huge sacrifices by staying at home.”

Mr Cummings came under fire earlier this year for seemingly breaking lockdown rules by travelling from London to a second home in Durham during the height of the pandemic.

He ended up giving his own press conference to explain the matter, where he insisted that he did not break any rules and said the journey was essential as childcare was required for his four-year-old son.