Formula One faces charge of aiding sportwashing by racing in Bahrain 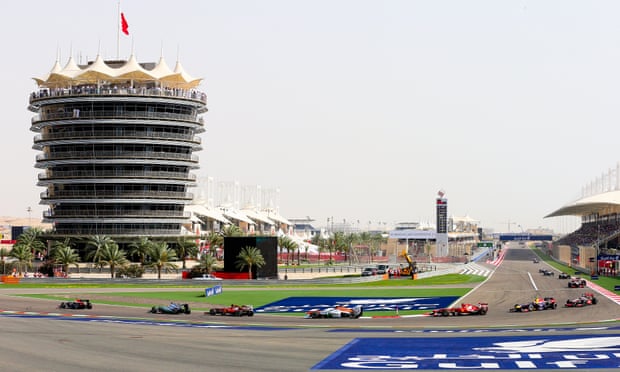 Shortly after winning his seventh Formula One world championship last week in Turkey, Lewis Hamilton issued a warning to the sport he loves. It was time it faced up to its responsibilities, to confront and deal with the human rights issues that blight some of the countries it visits, and do it now, he said.

He would have been more than aware that F1’s next two races would be held in Bahrain, with the first on Sunday. Hamilton has been strident in pushing F1 towards embracing anti-racism, human rights and diversity this season. He is the sport’s most globally recognised figure, which makes him impossible to ignore. In Turkey his words were unequivocal. “We realise we’ve got to face and not ignore the human rights issues in the countries that we go to, not just 20 years, 30 years from now, but now,” he said.

With the pandemic rewriting the F1 calendar, Bahrain is hosting two races back to back. The regime is doubtless pleased, but human rights groups maintain F1’s presence is nothing but sportswashing to disguise oppression.

In 2015, F1 adopted a commitment to respecting human rights in its operations globally. On Tuesday 30 cross-party MPs have written to the sport’s CEO, Chase Carey, to insist it is properly implemented. “We urge F1 to use maximum leverage to compel Bahrain to end suppression of protests against the race, secure redress for victims and ensure the rights of Bahraini citizens are defended,” they said.

A collection of human rights groups led by the Bahrain Institute for Rights and Democracy (Bird) have also written to Carey claiming that the Bahrain Grand Prix “has become a focal point of popular protest and serious human rights abuses have been committed by Bahraini security forces against protesters”.

F1 believes it can be a positive force for change when visiting such countries. The NGOs say the opposite is the case and accuse F1 of “performing invaluable PR for Bahrain’s government and risk further normalising the violation of human rights in the country”, their letter states.

The Bahraini government has issued a statement strongly denying any accusations of sportswashing.

In 2011, the scheduled race in Bahrain was cancelled after mass human rights protests against the ruling Al Khalifa family. However, after the suppression of Bahrain’s Arab spring, F1 has returned every year since.

In January, Human Rights Watch published a report stating the human rights crisis in Bahrain had worsened since 2011. They accuse the authorities of a “systematic campaign of retribution”, including documenting the “routine use of torture” in prison against activists opposed to the regime.

This year, Najah Yusuf, a former Bahraini civil servant, told the Guardian what this means for her. Yusuf was imprisoned in 2017 after criticising the race and the regime on Facebook. Her post criticising F1 was cited against her and the authorities said she had been convicted for “terror offences”.

After an international campaign on her behalf, Yusuf was released in August 2019 and has written an account of the abuse and sexual assault she had endured. Yet she says she is still being punished by the state. Her son Kameel was also targeted by the authorities in 2017. He has since been charged with multiple offences relating to his participation in demonstrations and sentenced to more than 20 years in prison. Kameel is 17.

“My son is targeted because of the international pressure that my case has received and his imprisonment is a reprisal,” said Yusuf. “This is something F1 should have a moral duty to enquire about. The government has made good on their promise to go after my son if I refused to keep my mouth shut. While my family is being torn apart, F1 has chosen to reward Bahrain with more opportunities to sportswash their abusive reputation.”

The Bahraini authorities deny the pair’s arrests and incarceration had anything to do with peaceful protest of F1 and say they were treated with due legal process and there has been no evidence of human rights abuses.

Bird, however, insists political prisoners are routinely treated harshly. Seven miles from the Sakhir circuit the Jau prison holds many including Hassan Mushaima, who is serving a life sentence having been involved in the pro-democracy protests in 2011. Now 72, Mushaima is in remission from cancer and suffers from diabetes and heart problems, but has had only sporadic treatment. His son says political prisoners face severe restrictions on healthcare, claiming they are forced to be “strip-searched, chained, shackled, and marched to external facilities if they want to attend medical appointments”.

The Bahraini Director-General of Reformation and Rehabilitation has stated Mushaima is receiving full healthcare and is not denied medical care in any way. Bahrain denies any abuse of Mushaima, Yusuf or her son.

Another prisoner at Jau is Ali Al Hajee. He is seven years into a 10-year sentence after helping to organise pro-democracy protests. After his arrest he says he was beaten so badly he required surgery, was left partially deaf and suffered permanent damage to his testicles. The 37-year-old is an F1 fan and longs for the sport to take action.

Human rights organisations have requested that if F1 must race in Bahrain, it should act to secure justice for victims of abuse such as Yusuf and to ensure that individuals peacefully protesting should be protected from persecution.

A statement from F1 said: “We have always been clear with all race promoters and Governments with which we deal worldwide that we take violence, abuse of human rights and repression very seriously. Our human rights policy is very clear and states that the Formula One companies are committed to respecting internationally recognised human rights in its operations globally and have made our position on human rights clear to all our partners and host countries who commit to respect human rights in the way their events are hosted and delivered.”

The Bahraini government’s statement rejected claims of human rights abuses. “Bahrain takes its obligations in this regard extremely seriously, and is committed to upholding and maintaining the highest standards of human rights protection, including the right to free expression,” it said. “Strong and effective constitutional and legal safeguards are in place to protect such rights and freedoms, with well-established, independent and transparent mechanisms to investigate and remedy (and where appropriate, prosecute) any shortcomings.

“No person is arrested or prosecuted for the peaceful expression of their opinion, and all persons arrested (regardless of the charge) benefit from full due process safeguards, including the right to representation and the right to fair trial before Bahrain’s independent judiciary. Further, the claims of torture and/or retribution are categorically denied.”

At the race in Imola, Hamilton was asked what he thought about the human rights issues in Saudi Arabia, where F1 is scheduled to compete next season. Hamilton said he did not know enough yet to comment. He did, however, note Nelson Mandela’s belief that sport had the power to change the world. Mandela was explicit in citing the sporting boycott of South Africa as playing a role in bringing down apartheid. Sport and politics unquestionably interact.

Yusuf has a clear view of what F1 represents in Bahrain. “It is just what the regime uses to whitewash their image. A way to launder their image internationally at the cost of our suffering. How can F1 justify that individuals can be targeted for peacefully criticising F1 and they do nothing about it?”

It seems clear this season Hamilton has recognised there are greater issues at stake than mere racing. “We go to all these countries,” he said in Italy. “Whilst it’s a great event, we don’t leave a long-lasting positive effect on those places. The question is can we? Can we be a part of bringing attention to certain issues and pushing for change.”

Hamilton has asked the question and F1 must react, because if not now, when?