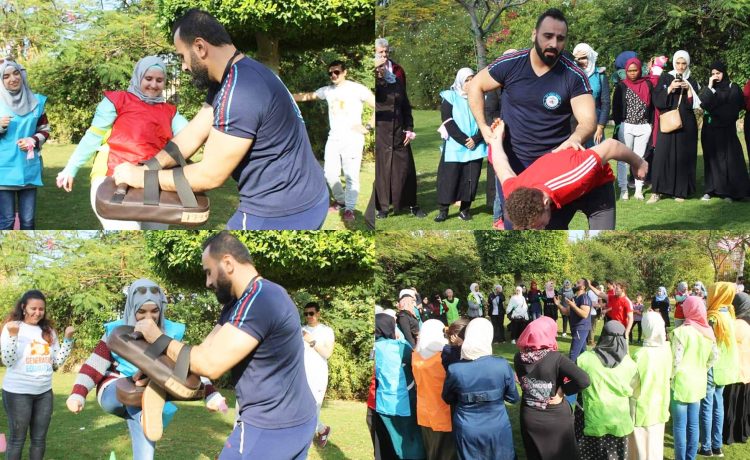 As the world continues to make progress in the fight against COVID-19, there is a “shadow pandemic” which needs to be addressed in the context of recovery efforts, according to the United Nations (UN): responding to an increase in violence against women.

Globally, even before the COVID-19 pandemic began, almost one in three women worldwide would experience physical and/or sexual violence in their lifetime, mostly by an intimate partner. But this year, as the world retreated inside homes due to lockdown measures, cases of domestic violence have risen by 30 per cent in some countries, and emerging data shows a significant increase in calls to domestic violence helplines, many of which have reached capacity.

On 25 November, to mark the International Day for the Elimination of Violence against Women, the IOC is raising awareness of the problem and showcasing how sport can be a solution by providing safe spaces for women and giving them tools for empowerment. And what better way to do this than to highlight the work of refugee wrestler Amir Al-Awad who is striving to make it to the IOC Refugee Olympic Team Tokyo 2020. In addition to his training, Amir has started a movement in his host community of Alexandria (Egypt) to support women by teaching them self-defence skills that they can use if confronted with harassment or violence.

This takes place at Amir’s Syrian Sports Academy, which is supported by UNHCR and provides a sanctuary in the city for refugees to integrate and practise sports. The women’s self-defence classes have proved so popular that Amir has even starting replicating them online as an Airbnb Experience, with support from the IOC.

Here, we talk to Amir about his mission to help protect women from violence, and the positive impact his classes have been having on the participants…

WHY DID YOU DECIDE TO START PROVIDING SELF-DEFENCE CLASSES TO WOMEN IN YOUR COMMUNITY?

Women are the first homeland for human beings: they are the originators of life, and the first teachers. Therefore, women need to be strong.

But unfortunately, because of war and ignorance in our part of the world, society stopped valuing women as they are supposed to be valued. Women are being harassed, verbally and physically, and there is not enough monitoring or rules to give the women back their rights in the male-dominated society we are living in.

We kept hearing about women’s rights conferences, but we did not see any improvement. There were lots of idea being discussed, but nothing concrete was taking place. That’s why I decided to start giving something practical to women, so that they can stand up for themselves and overcome their fear of venturing into the streets.

HOW HAVE YOU REMOVED BARRIERS TO ACCESS SO THAT EVEN THE MOST VULNERABLE WOMEN COULD ATTEND YOUR CLASSES?

The Syrian Sports Academy started a movement where we encouraged other clubs and academies in Alexandria to give women one week free of charge to learn self-defence and fitness. It was a form of using sports to teach women, and we wanted to give them the chance to do this for free – because for a majority of our participants, they don’t have the financial means to take part in any sort of fitness classes.

The people who come to the classes are not athletic. They are regular, ordinary people, and the majority of them don’t have the physical fitness to do really technical moves. So we use role play to show them the scenarios that could happen to them in the street – for example, how to spot a person who is harassing them or trying to rob them, and how to react.

We also provide a hotline or contact number that we give to the women who take the self-defence classes, so that if they’re in a certain situation where they need help, they can call our Academy and ask us to be there for them.

WHAT BENEFITS DO THE PARTICIPANTS GAIN FROM THE CLASSES?

When encountering situations that were dealt with during the classes, some of our participants have managed to react in a better way through the teaching they have received. I was happy to see the idea put into practice and bearing fruit, with people benefiting from it.

I believe that women are not weak; they just don’t know how to react in a certain way, because they haven’t discovered their full potential. But through these classes, they start to see the strength within them.

WHAT IS YOUR MESSAGE ON THE INTERNATIONAL DAY FOR THE ELIMINATION OF VIOLENCE AGAINST WOMEN?

My message is not just for women, but also the people who do the criminal activity against women. Women are the source of life, so you should have respect for women, and you should be conscious about the damage you’re causing to them.

My message to women is that you’re strong and you’re powerful, regardless of what has happened to you previously or what could happen in the future. You have the strength and you have the power to defend yourself. You’re not weak and you’re not a lesser human being. You are the world!