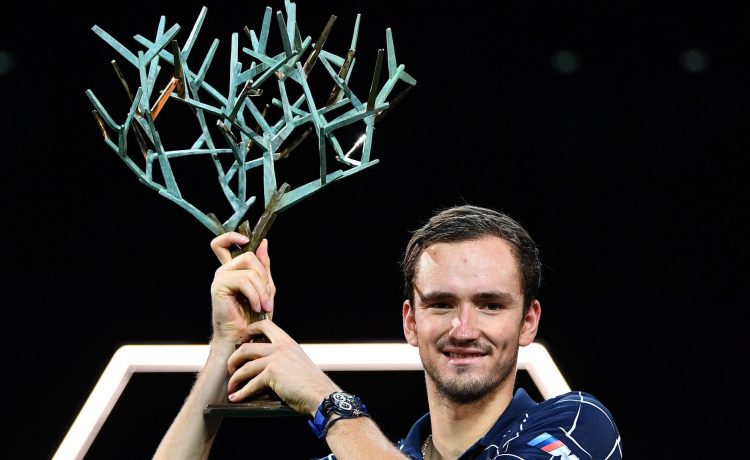 Daniil Medvedev did more than win his third Masters title when he beat Alexander Zverev 5-7, 6-4, 6-1 in Paris on Sunday evening. In a dark, cavernous hall at the Palais Omnisports stripped of fans and atmosphere, the Russian rediscovered the aura of 2019, when he announced his arrival in the US Open final against Rafael Nadal, and reminded his rivals he will be formidable at the ATP World Tour Finals in London next week.

In a little over two hours of intense, high-grade tennis, the world No5 made himself second favourite behind Novak Djokovic for the season-ending shindig at the O2 Arena, which starts on 15 November, the 12th and final edition of the event in the capital before it moves to Turin for five years.

Medvedev admitted in the immediate aftermath: “Before the tournament I was not in my best form, with zero finals this year. I was complaining to my wife [Daria], ‘Oh my God, I don’t have the level, I’m playing so bad.’ So to win at Bercy, a tournament that I love, first final in France, three Masters titles, I’m just super happy.

“I was playing really good this tournament, especially today. After the first set, I could have given up. Sacha was serving well. But I stayed in there and, in just one moment, I raised my level higher and higher, and that broke him down a little bit.”

Zverev, who has been on fire for several weeks, played his part but wilted at the end. They were perfectly matched, a year apart in age, two places separating them in the rankings and a history that reaches back to their junior days.

Both have Russian parents, both are Bayern Munich supporters who could, if they wished, swear at each other in three languages and, more importantly, both are big-serving, free-hitting shot-makers on the rise in an era of change.

Their rivalry – 5-1 to Zverev before Sunday – will be at or near the centre of the game’s progression for years to come. Medvedev’s previous win against him came at the Shanghai Masters last year, when he allowed Zverev only five games in an hour and a quarter. This was an entirely different contest. If Medvedev appeals as the more intuitive, Zverev’s drive and intensity are impressive, too, especially during his unbeaten run of 12 matches to this final.

They entered the near-empty Court Central for the final of the ninth and last Masters event on the calendar, the 30th tournament behind closed doors since the resumption, to a souped-up remix of Aretha Franklin’s Think – not a bad mantra for a tennis match.

What thought they put in beforehand was quickly evident when Medvedev asked Zverev to serve. The German held, nervously. There is nothing they do not know about each other’s game.

Each of them relies on a mentor: David Ferrer is Zverev’s coach, while the cerebral Medvedev listens intently to his French sports psychologist, Francisca Dauzet, who is often seen courtside wearing a T-shirt emblazoned with “Good Vibes”. He needs an audience, though, and has been flatlining in front of empty stands for months.

He rose to the occasion here, however, in full control of his inner beast. Zverev pinched the first set artfully after 40 minutes when he induced Medvedev to hit long. At that point, he looked to be cruising.

Ferrer’s input has helped Zverev a lot. His forehand is more reliable, his serve not the outlandish liability it was a year ago, with 83% landing in the first set, which applied unrelenting pressure on Medvedev, whose challenge now was to find a “good vibe” quickly, or the party would end before they called to collect the bins.

The third game of the second set was 15 minutes of sheer exhilaration, and pivotal. Slicing and waiting, Medvedev won a superb 38-shot rally with an unreachable forehand on the empty ad side that had his opponent shaking his head. Zverev double-faulted then aced to save, before they entered a fierce deuce struggle. After another double-fault and a string of awesome rallies, Zverev saved a fourth break point, before wrong-footing Medvedev at the net to hold. It was a match in itself.

But the fight swung sharply Medvedev’s way as he cracked the Zverev serve for 5-4 and held to love for the third time in a row, then levelled at a set apiece after an hour and a half. The pendulum kept swinging to the Russian’s beat as he broke quickly at the start of the third and ground out an attritional, 10-minute hold through five deuce points for 2-0.

The level remained exceptionally high on both sides of the net until Medvedev won his sixth game in a row for 3-0 and held comfortably for 4-0. Zverev suddenly took on the look of a beaten man. Token resistance delayed Medvedev only until his bewildered foe double-faulted on match point after two hours and seven minutes of breathtaking entertainment.

Under off-court pressure all week over disputed allegations of abuse by an ex-girlfriend, Zverev said during the presentation ceremony he was “preparing for parenthood”, but declined to expand on that afterwards.

He did admit: “At the end of the second set I was tired. I was dead. I didn’t quite have the energy to finish it off. I knew I had to win in two sets.”