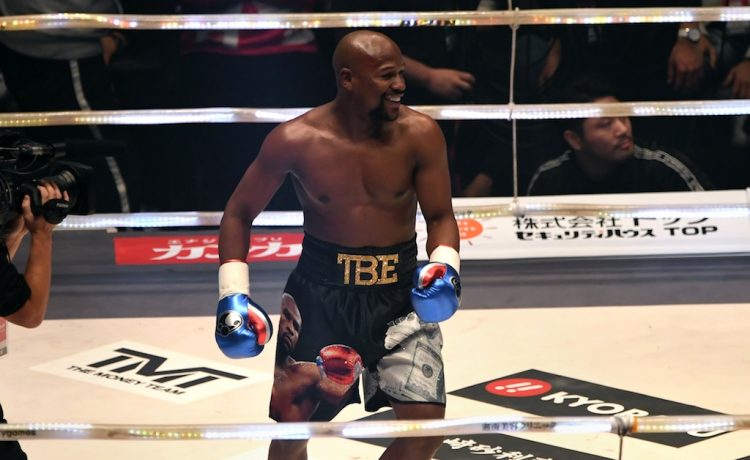 (FILES) In this file photo taken on December 31, 2018, US boxing legend Floyd Mayweather celebrates after winning an exhibition fight against kickboxer Tenshin Nasukawa of Japan at Saitama Super Arena in Saitama. - Boxing legend Floyd Mayweather will return to the ring with a fight in Tokyo in February 2021, organisers said on November 16, 2020, but who he will fight and under what rules was left unclear. (Photo by Toshifumi KITAMURA / AFP)

The Money attended a press conference to confirm his appearance at a show in Tokyo on February 28.

But it is still unclear whether the 43-year-old will be stepping into the boxing ring or the mixed martial arts octagon.

He would be on the same show as new MMA event MEGA 2021 at the Tokyo Dome.

talkSPORT boxing editor Michael Benson tweeted: “Floyd Mayweather will return to the ring for a fight at Tokyo Dome on Feb 28th.

“Details scarce, but Floyd called into a presser to announce he would compete on same show as new MMA event ‘MEGA 2021’.”

Mayweather has had one professional boxing bout since 2015 as he came back to dispatch Conor McGregor in 2017 to seal his 50-0 record.

He hasn’t been involved in any fight since blasting away kickboxer Tenshin Nasukawa in an exhibition on New Year’s Eve in Tokyo in 2018.

SunSport exclusively revealed in July that Mayweather – who won 15 world titles during his glittering career – was in talks about a comeback fight in the Far East.

The American himself then confirmed the news, however due to the coronavirus crisis, he has not been able to lace up the gloves again this year.

And then speaking on his Instagram last week, he added that he would be heading to Tokyo to fight.

“I know the Olympics is in Japan in 2021 but me, myself, Floyd ‘Money’ Mayweather and my team will be doing something big in Tokyo Dome.

“Trust line, I want to say thank you for treating me good and treating my team good. Japan, I am on my way.”