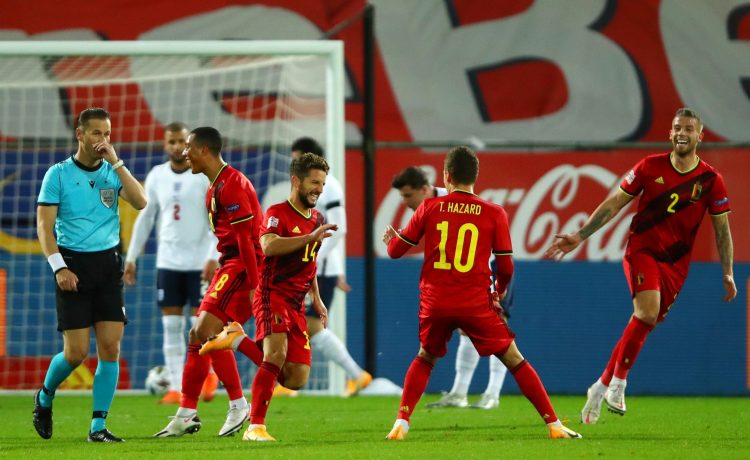 In one of their last serious tests before next summer’s Euros, there was little to  suggest that England can be genuine contenders to win the thing.

You might call it a reality check, but in reality, Gareth Southgate’s men have been uninspiring in four of their five competitive matches this autumn.

Their chances of reaching the Nations League finals were ended by two early goals from Youri Tielemans and Dries Mertens.

And even though England created chances against Fifa’s world No 1 team, Belgium had superior quality at either end of the pitch.

Southgate can point to injuries and suspensions to key players — Raheem Sterling, Marcus Rashford, Harry Maguire, Trent Alexander-Arnold and Joe Gomez might all have made his starting line-up.

But his devotion to playing with three central defenders and wing-backs leaves the Three Lions without a creative force behind skipper Harry Kane.

So to decide against starting with the pace of Jadon Sancho, who had scored against the Republic of Ireland on Thursday, always felt like a conservative move — and there have been too many of them from Southgate.

At least the England boss has lost his blind spot over Aston Villa’s Jack Grealish, who was excellent on his first competitive England start and will take some shifting from this team.

But it still wasn’t enough to unlock an experienced Belgian defence.
England aren’t bad at all but neither are they world-beaters.

You sense that, in his heart of hearts, Southgate doesn’t quite believe they are ready to win a tournament, hence those overly-cautious starting line-ups.

Sterling had failed a late fitness test after suffering a knock in training, so Southgate elected to start both Grealish and Mason Mount to support Kane in attack.

England’s victory over the Belgians at Wembley last month had been notable, yet they had been thoroughly outplayed for the opening half-hour.

But a subsequent home defeat by Denmark left Southgate’s men knowing they would probably need a victory in Leuven to reach the finals — and that was never really on the cards.

Belgium are unbeaten in competitive home matches for more than a decade and you could see why, even though England had more shots on goal.

Within two minutes, Kane went on a driving run at the heart of the home defence and drilled one just wide.

But England were behind inside ten minutes.

The Leicester midfielder leathered his shot, which deflected off Tyrone Mings, with Jordan Pickford only able to turn it on to the inside of the post and into the net.

Dier is respected as a player and a bloke but at elite level, he gives away too many goals.

England were straight back at  Roberto Martinez’s side, though,  Kieran Trippier whipping in a cross and Grealish nipping in at the near-post only for his effort to be deflected wide by Toby Alderweireld.

From Trippier’s corner, Kane beat Thibaut Courtois with a stooping header, only for an alert Lukaku to dart back and nod off the line.

But midway through the first half, Belgium were two up — Declan Rice penalised for catching Kevin De Bruyne after he had nicked the ball.

Mertens, playing in his hometown stadium, bent in a superb free-kick with Pickford clutching at air. Ben Chilwell was forced off through injury before half-time and replaced by Bukayo Saka, leaving Southgate without four defenders who might be considered first-choice.

If there was to be a change at half-time you would have expected Sancho to arrive and give England an injection of pace.

Instead it was Harry Winks, not currently playing for Tottenham in the Premier League, who replaced Jordan Henderson.

Still, England had a couple of early sighters in the second half.

Grealish got away with a foul on Axel Witsel, before Alderweireld brought down Spurs team-mate Kane on the edge of the area but Mount was wayward with his free-kick.

Then Grealish, on a darting run, was tripped by Thomas Meunier only for Trippier to plough his free-kick into the wall.

Mount soon released Kane but the skipper — who had just taken a heavy whack from Jason Denayer — shot meekly at Courtois.

Pickford made a fine save to deny Lukaku and with England stretched it was the hosts who looked the more likely late scorers.

This has been a grim old autumn for Southgate — and even though off-field controversies have often overshadowed the actual football, there is little doubt they have gone backwards.