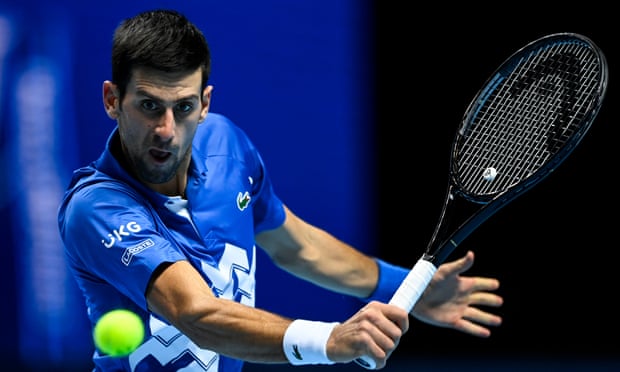 A decision on when next year’s Australian Open will be held is imminent, but a delay of a week or two is the “most likely” outcome of talks between the state government, health officials and Tennis Australia.

The Victorian sports and tourism minister, Martin Pakula, conceded on Wednesday that a postponement of the tournament, which is scheduled to start on 18 January, was probable as the state continues its recovery from a hard Covid lockdown.

The Victorian premier, Daniel Andrews, had earlier stated the first grand slam of the tennis season “will go ahead” at Melbourne Park but, as delicate negotiations continue, it appears inevitable the tournament will not begin on time.

“There’s a number of potential dates on the table. I’ve seen reports that suggest that it’s likely to be delayed by a week or two. I think that’s still most likely,” Pakula said. “But it’s not the only option. As you know, the French Open was delayed by many months and Wimbledon didn’t occur at all.

“I still think it’s much more likely that it will be a shorter rather than longer delay. I don’t want to unduly repeat myself but these are very complex negotiations.”

One of the major sticking points is the issue of quarantine for international players and their entourages. Victoria will ease its policy on arrivals on 7 December, but players have been told they will not be allowed into the state until January, so as not to overburden the hotel quarantine system.

Andrews’s hardline stance – that all travellers arriving in Victoria quarantine for 14 days – and the possibility that players may not be allowed to train while in isolation, has polarised the world’s top players, including Novak Djokovic and Rafael Nadal.

But, following speculation the players’s quarantine could be shortened to 10 days, Andrews on Wednesday reiterated there would be no exceptions to the rules.

“The rest of the world is on fire, so there will be quarantine for anyone coming to our city or state,” Andrews told the Sunrise program. “You’ve got 250,000 cases a day in the United States, Europe is not much better, many parts of Asia are really struggling.

“As important as a tennis tournament is, we’re not going to jeopardise our coronavirus status by anything other than the highest standards.”

Victoria has now gone 26 days without reporting a new coronavirus case and on Tuesday recorded its first day free of new cases, lost lives or active cases since February.

Pakula said the intricate details of quarantine arrangements for players and their teams were close to being finalised, but he would not comment in public on their exact nature.

Djokovic, the men’s world No 1, has called on the Victorian government to allow players to compete in warm-up tournaments while quarantining, while John Millman, who was last month elected to the ATP Tour Player Council, said it would be impossible to expect players to perform at a grand slam straight out of two weeks in a hotel room.

Daniil Medvedev, ranked fourth in the world, said some players might choose not come to Australia if they were forced to quarantine for two weeks.

Rafael Nadal, the men’s world No 2, has been more circumspect and said after losing to Medvedev at the ATP World Tour Finals in London on Sunday: “We just need to be patient and accept the situation that we are facing.”

This year’s French Open, which Nadal won, was pushed back from its usual start date in late June to September due to the coronavirus, while Wimbledon was cancelled outright for the first time since the second world war. The US Open went ahead with strict biosecurity regulations in place.

The Australian Open has been played every year since its inception in 1905, with the exception of the years spanning both world wars and in 1986, when the start date of the tournament was changed from December to January.

“We’ve got obviously a huge amount of complexity in negotiating with both Tennis Australia but also with the ATP and the WTA,” Pakula said. “And then there’s the conversations with the Department of Health and Human Services and Justice.

“So it’s a very complicated set of conversations. I’m still confident we’ll have an Australian Open and we’ll have one in the early part of the year.”

Roger Federer has ‘additional’ reason for withdrawing from 2021 Australian Open