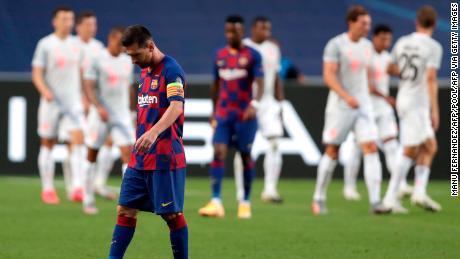 However, for the third season in a row, Barcelona found an increasingly more humiliating and painful way to be dumped out the Champions League, losing 8-2 to Bayern Munich. While many had the Catalans as underdogs against Bayern, a Barcelona side that included the great Lionel Messi, as well as club legends Gerard Pique, Sergio Busquets and Luis Suarez, were expected to put up a fight. But the Germans ran riot in Lisbon, thanks to braces from Thomas Muller and Philippe Coutinho, inflicting a record defeat on Barcelona. The manner of the defeat — in which it conceded 3.1% of all the Champions League goals it has ever conceded — left Barcelona fan Ryan Alam feeling "humiliated.""At one point I was hoping Bayern would show us some sympathy but that never came," he told CNN Sport. "I didn't expect such a disappointing performance from the very club I've supported my whole life. I hope all this happened for a good reason, and the board fixes its issues with the president, the club's transfer policies, and finds a manager that fits Barcelona's caliber."READ: 'More than a Club?' How FC Barcelona 'lost its soul'

One newspaper in Spain called the result the "end of a shameful cycle," while another called it a "historical humiliation." Another just simply had the headline: "Shame."Despite giving its fans some brief hope by drawing at 1-1 in the seventh minute, once Bayern retook the lead just 15 minutes later, the result never looked in doubt. Barcelona's insistence — and inability — to pass the ball out from the goalkeeper against a ruthless Bayern pressing system result in goal after goal. "While Barca did not perform, Bayern must be given credit for the game they played. It was world class football," Barcelona fan Ali Mir explained. While Bayern looked like a well drilled, physically fit team, Barcelona looked like an ageing collection of individuals too heavily reliant on the magic Messi can often summon. 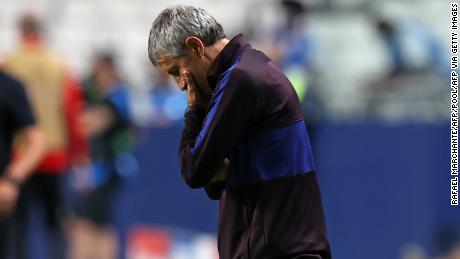 Pique, who has played for Barcelona for over 10 years, looked visibly emotional while giving his post-match interview, saying "the club needs change.""This is not the first, nor the second, nor the third time," Pique told Movistar after the game. "It's hard, it's very hard, and I hope it counts for something. "And well … we must all reflect now, the club needs changes and I am not speaking of the coach, nor the players. I do not want to single out anyone. I think structurally the club needs changes, because as I said it's not the first, nor the second, nor the third time. "Nobody is essential. I'm the first to offer myself if new blood has to come and change the dynamic. Because now we have hit rock bottom. And well … now we all have to reflect internally on what is best for Barca, which at the end of the day is the most important thing. "A club like Barca must be at the top, winning and competing. We've gotten to a point where we cannot hide anymore which is reflected on the field. What happened today is unacceptable for a club like Barcelona."Read More – Source