Serena Williams battles past sister Venus in their 31st clash 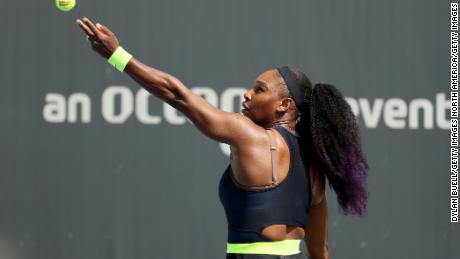 The 23-time major tennis champion, playing in only her first event since February, rallied back from a break down in the final set to overcome her sister, 3-6, 6-3, 6-4 in the second round of the inaugural Top Seed Open in Lexington, Kentucky. "Last couple of games, I just wanted to win because I have been losing a lot of those tight sets," Serena, who had been down 4-2 in the final set, said in a post-match interview."So I said 'I really need to try to win this'… just for my game and my confidence, so I just tried to focus on those last two games," added the former top-ranked American, who extended her lead over her older sister to 19-12 in career meetings on a hot and humid day.Visit CNN.com/sport for more news, videos and features

The 38-year-old Serena and the 40-year-old Venus have dominated the sport for more than two decades and hold 30 major singles titles between them. Before this week, they had last played each other two years ago in the third round of the US Open. Serena's 6-1, 6-2 win had been a star-studded affair, played under the lights in the night session at a packed Flushing Meadows in New York.Their 31st career meeting was played in less glamorous surroundings, behind closed doors on a small court at a private tennis club near a busy road. The recently added event in Lexington, the first tennis tournament since the coronavirus pandemic shut down the sport for five months, has strict biosecurity measures in place to prevent the spread of Covid-19. The event in Kentucky serves as a warmup event for the US Open, which starts at the end of this month in New York and where Serena is trying to win a record-tying 24th major singles title. She last won a Grand Slam singles title at the 2017 Australian Open.

Unlike Serena, Venus had been playing a few exhibition matches in recent weeks. She had taken advantage of the lengthy layoff to revamp her service motion, and had been in fine form in the opening round, beating former world No. 1 Victoria Azarenka of Belarus in straight sets.Serena, who came close to going out in the opening round against the 60th-ranked Bernarda Pera, started well against her older sister as she took a quick 2-0 lead. But after squandering three breakpoints for 3-0, she got broken in the next game on a backhand error. It was all Venus after that, winning six of the last seven games to take the first set 6-3 as she put a now erratic Serena under pressure from the back of the court with blistering groundstrokes. Serena regrouped in the second set, winning it on a backhand error after 50 minutes following a break of serve in the sixth game. With the heat rule in place after two sets as temperatures hovered around 31 degrees Celsius (87 degrees Fahrenheit), Venus went off court for 10 minutes, while Serena stayed behind on the court.Serena fought back from a break down in the final set to to win four games in a row and clinch her 19th victory over her sister."Honestly, I am playing well, but I don't think I've ever had a tougher draw in my life," Venus said in a post-match news conference on Zoom. "I basically played twoRead More – Source