Footballer won’t play for Belarus while Lukashenko is president 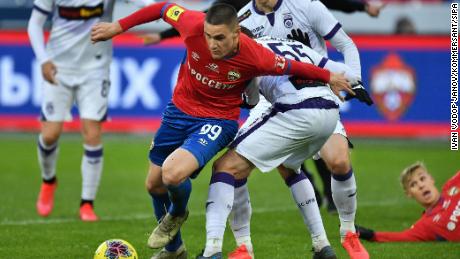 The 21-year-old forward made the announcement on Instagram, accompanied by a picture of a protester wearing Belarus' white and red flag that has been used by anti-government protesters.Visit CNN.com/sport for more news, videos and featuresTens of thousands gathered in the capital city of Minsk on Sunday, a week on from Lukashenko's victory in the presidential election which independent observers have criticized for not being free and fair.Thousands of people have been detained during protests against the government over the last week after opposition leader Svetlana Tikhanovskaya fled the country to Lithuania.Lukashenko, who has ruled Belarus for 26 years, meanwhile gave a speech to government supporters in Minsk on Sunday while protests were ongoing. Shkurin moved to CSKA Moscow after top-scoring in the Belorussian league last season with 19 goals. He had been selected for Belarus' UEFA Nations League matches against Albania and Kazakhstan in September."I again find out about getting into the extended list of the national team through social networks therefore will post my answer here too," Shkurin wrote on Instagram. "Long live Belarus."The Belarus Football Federation (BFF) did not immediately respond to CNN's request for comment regarding Shkurin's decision."Sports and football in particular have always been and should remain a peaceful arena, neutral in political, religious, ethnic, racial anRead More – Source