Why Zlatan Ibrahimovic is comparing himself to Benjamin Button 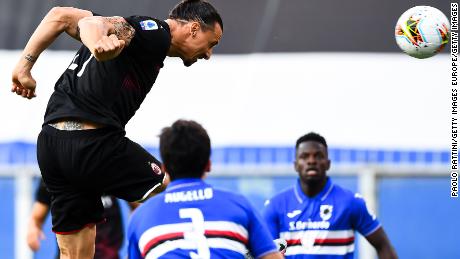 The 38-year-old star made the comparison to the fictional character, who ages in reverse, after scoring a brace in AC Milan's 4-1 win over Sampdoria on Wednesday."I'm like Benjamin Button, I've always been young, never old," Ibrahimovic told Milan TV. The veteran striker, who has played for the likes of Manchester United, Barcelona and LA Galaxy, returned to AC Milan at the end of last year and has since scored nine league goals during his second stint at the club. The Swede had previously played for AC Milan between 2010 and 2012, initially on loan before moving to the club. READ: Zaha says he's 'scared' to open Instagram due to racist messages

'Just getting warmed up'

Before joining the Rossoneri, Ibrahimovic played three seasons for fierce rivals Inter Milan where he scored 57 goals. "Hopefully, I can keep on going like this with the strength to score, because at the end of the game I get tired, right? Because they say I'm old but I'm just getting warmed up," added Ibrahimovic after Wednesday's victory. "IRead More – Source