HomeTennis‘Very hard on me’: Tennis star struggling with effects of Covid-19
Tennis

‘Very hard on me’: Tennis star struggling with effects of Covid-19 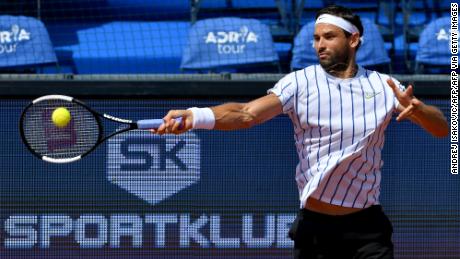 World No. 19 Dimitrov recorded a positive test in late June shortly after playing at an Adria Tour tournament in Croatia, an event organized by Novak Djokovic that was widely criticized after several players — including the world No. 1 — tested positive for coronavirus.Visit CNN.com/sport for more news, videos and featuresThe Bulgarian has since returned to the court, competing at the Ultimate Tennis Showdown (UTS) in France last weekend where he lost to Feliciano Lopez and Richard Gasquet."The virus was hard on me," Dimitrov told the Tennis Majors website. "I stayed home for about a month … I think it's different for everyone. I was not breathing well. I was tired. I had no taste, no smell. Everything you could possibly think of. So it was no fun."To be honest I'm lucky to be on the court right now. I don't take each day for granted. I really appreciate being here. It's so nice that during time off you can come out and play with your competitors."READ: Simona Halep, concerned about rising coronavirus cases and travel, pulls out of tennis' return eventDimitrov said he has lost three kilos since contracting the virus, but added that the mental toll of isolating on your own can be as challenging as the virus' physical impact, saying he had been alone for 20 days. "A lot of things are going through your head. It doesn't matter how mentally strong you are, as a person, athlete, or anything. It's inevitable to have some bad thoughts in your head. "I had to deal with that, too. So does everybody else out there. That's one of my biggest messages: we should not underestimate the power of the mental state that everybody is in. If we take the right precaution and everybody is safe, things will get better quicker. "But it's a strange time. You have to work on your physical (health) but on your mental aspect, as well."The UTS, which is held without fans at the Mouratoglou Academy in France, sees games played in a shortened format with an average match-length of under an hour. Patrick Mouratoglou is Serena Williams' coach.READ: Tennis tournaments cancelRead More – Source