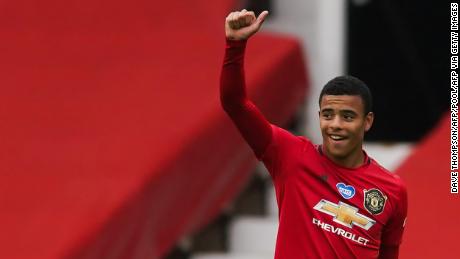 The 18-year-old, widely considered one of the most exciting prospects to emerge from United's academy in recent years, continued his brilliant run of form following the Premier League restart to take his goal tally to 15 in all competitions for the current season.It's the first time a teenager has scored 15 goals in a season for Manchester United since Wayne Rooney reached the milestone back in 2004-05.Greenwood outshone his more experienced teammates to take the Man of the Match award against Bournemouth — just rewards for a brilliant all-round performance.READ: Liverpool title-winning celebrations dampened after thrashing from Manchester CityWhat makes the youngster such a devastating threat is how comfortable he feels attacking from either side, as evidenced by his sweetly-struck goals with either foot against Bournemouth.Greenwood's brace means he now has eight goals and an assist in just seven Premier League starts this season.READ: Meet the Manchester United fanatic opening a 33,000-piece museum in Finland"I've seen Wayne Rooney at the same age and Mason is a specialist finisher and specialist goalscorer," manager Ole Gunnar Solskjær told reporters after the match. "He knows exactly what to do with the ball when he's on the pitch. If he shoots, he will score. He's going to get better and his general play has improved. "I don't want to compare to Wazza [Rooney] or [Cristiano] Ronaldo, I don't think that's fair. The boy will create his own career doing it his own way I'm sure Mason will have a fantastic career as well."

Though he may have had the limelight stolen away from him on Saturday, United's newest signing, Bruno Fernandes, continued his brilliant start to life at Old Trafford with another goal and an assist.The Portuguese star set up Greenwood's first goal, before firing in a stunning free kick in the second half to take his total number of goals and assists to 10 in just his first nine games in the Premier League.Only Eric Cantona and Robin van Persie have reached that total as quickly in Manchester UnRead More – Source