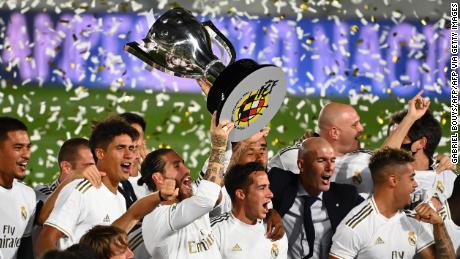 Zinedine Zidane's side went into Thursday's game against Villarreal knowing a victory would be enough to secure just the club's third domestic league title this decade — and the first since Cristiano Ronaldo's departure.It was far from the team's best performance this season — indeed it looked as though nerves were a hindrance early on — but Benzema's brace was enough to seal a 2-1 win and bring the crown back to the Spanish capital.This team has won countless trophies with Zidane in charge, though it appeared the occasion was getting the better of his players as several passes went astray in the opening stages.But it was Luka Modric, himself guilty of a few errant passes, who got the party started for Real, winning possession back in Villarreal's half and playing a pass into Benzema, who drilled the ball low under Sergio Asenjo.With 15 minutes left on the clock, Benzema put the result beyond doubt from the penalty spot after Sergio Ramos had dubiously been brought down following a surging run from defense.The penalty did have to be retaken after Ramos passed the first effort to Benzema, who had encroached into the area way before his teammate had touched the ball.READ: From the Midlands to Madrid, the life of trailblazing Black footballer Laurie Cunningham that was ended too soonREAD: Gareth Bale making headlines with yet more antics on the substitutes' benchWith Benzema chasing Lionel Messi for the top scorer award, Ramos allowed his teammate to take the second penalty, which he drilled low to Asenjo's right.There were some nervy moments in the closing stages after Vicente Iborra pulled a goal back for Villarreal, but Real Madrid held on for the win — thanks to some heroics from goalkeeper Thibaut Courtois — despite a late onslaught from the "Yellow Submarine."Elsewhere, Barcelona knew it needed to win to have any hope of forcing the title race to the final day of the season. However, a shock defeat at home to 10-man Osasuna for Messi and Co. was the icing on an already delicious cake for Real Madrid.It was certainly a strange setting for Real to be celebrating a record-extending 34th league title. Normally accustomed to playing in front of an 81,000 capacity Santiago Bernabeu, the team has been playing all of its matches since the enforced break due to the coronavirus pandemic at the club's training center, due to its usual home currently undergoing renovations."Today is one of the best days for me as a professional and after everything that happened, the three-month break, it's fantastic what's been achieved," Zidane told La Liga after the game."It's strange for everyone, we can't control the situation. We would have loved to be with the supporters, hopefully that can happen further down the line but for a question of health it can't."But I'm sure the supporters are happy celebrating at home."

This was a season that promised so little for Real Madrid, yet eventually delivered so much.The team struggled last season, as many predicted they would. It was life after Cristiano Ronaldo — the club's first year without the talismanic forward since 2009 following his move to Juventus — and Zidane. Julen Lopetegui was hired to replace the French coach, but was fired just four months into the job after a string of poor performances. Real then turned to reserve coach Santiago Solari, who was hired permanently by default due to La Liga rules stating a caretaker manager can't be in place for more than two weeks.He lasted just five months and with the club now desperate, it turned to the man who had achieved unprecedented success in his time as manager. 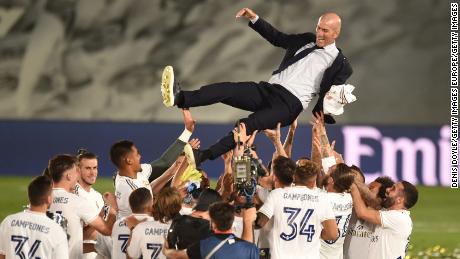 "Next season, winning the league will be the priority," a buoyant Zidane told reporters at his second unveiling as head coach.He had returned, but the results of old didn't follow Zidane back to the Bernabeu. Many began to question the Frenchman's ability as a tactician and asked whether he relied too much on individual star power, namely Ronaldo, to achieve success.This season, however, Zidane transformed the team in a truly impressive fashion. Without Ronaldo's goals — the Portuguese star scored an astonishing 451, a club record, during his time in Madrid — Zidane knew huge improvements were needed elsewhere.It's often said that any good title-winning team is built on a solid defense and Zidane has turned Real's leaky and fragile back line into the best in La Liga.Last season, the team conceded 46 goals and finished in third place, a distant 19 points behind bitter rival Barcelona. This season, with just one game left to play, the team has let in just 22.That's not to say the front line hasn'Read More – Source