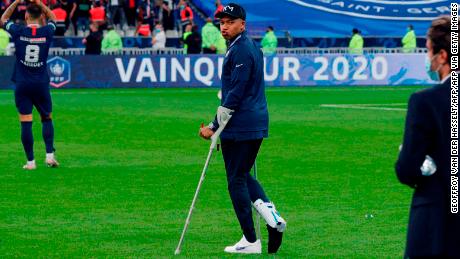 The 21-year-old limped out of Saturday's French Cup final win against Saint-Étienne following a late tackle from Loic Perrin, who was shown a red card for the challenge.Initial scans showed that Mbappe, who was on crutches and wearing a protective boot during the trophy ceremony, had a serious right ankle sprain which is to be reevaluated 72 hours after the game.PSG went on to win its 13th French Cup title thanks to Neymar's 14th-minute winner."It was complicated with all the fouls to Thilo Kehrer, Neymar and Mbappé," Tuchel told reporters after the match. READ: Cristiano Ronaldo scores as Juventus wins ninth straight Serie A titleREAD: Manchester United, Chelsea seal Champions League spots as Leicester misses out"In the last three matches against Saint-Étienne they get a red card in the first 30 minutes. I don't know what is being said in their dressing room. It is horrible, I can't understand it."PSG's Champions League campaign resumes on August 12 against Atalanta, with all matches in the competition's altered format now being played over one leg instead of two.Mbappe's absence would be a huge blow to the club's aspirations of securing an unprecedented quadruple of trophRead More – Source